Photos: US Army Views Trio of Designs for Next Generation Squad Weapon 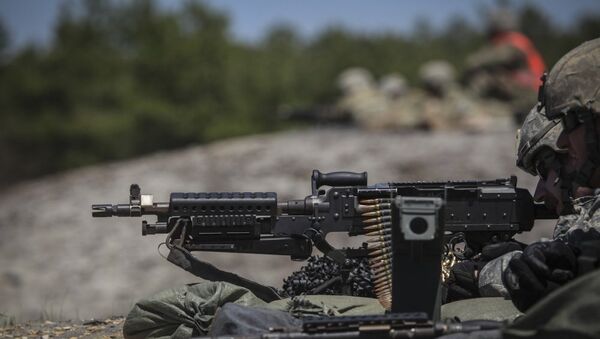 After narrowing the competition to build the US Army’s next standard infantry weapon to three contractors, the service viewed their prototype designs for the first time earlier this month.

At the annual Association of the US Army meeting from October 13-16, three new firearms that could potentially become the Army’s Next Generation Squad Weapon were displayed for the curious to glimpse.

The three weapons, which will fire the rare 6.8-millimeter bullet, all aim to supplant the Army’s M4A1 carbine and M249 squad automatic weapon (SAW), which use 5.56-millimeter rounds. The Army plans to pick one in early Fiscal Year 2022, with the aim of equipping an infantry brigade combat team with the new weapon by early FY 2023, Military.com reported.

Sputnik previously reported the Army wants the rifles to use a miniaturized version of the computerized optics seen on main battle tanks, which automatically accommodate for wind speed, barrel temperature and other factors when helping the gunner aim the weapon.

Other features requested of any competitive bid include a flash hider for minimizing muzzle blast visibility, a removable sound suppressor, a carry sling and extensive durability protecting it from everything from rust to electromagnetic attacks, Popular Mechanics noted.

One rifle, designed by General Dynamics Ordnance and Tactical Systems, features a complex bullpup design in which the magazine fits behind the pistol grip for a more compact and shorter overall rifle. Military.com noted that both the rifle and automatic rifle variants are shorter than the guns they would replace. However, few other details, such as the weapon’s weight, were available. A General Dynamics representative said the rifle version is under 10 pounds and the automatic rifle version under 11 pounds.

The rep told Military.com both weapons are ambidextrous and that while a rate of fire for the rifle version hasn’t been set yet, the automatic version will put out between 500 and 750 rounds per minute.

The RM277 - General Dynamics' new bullpup offering for US Army's NGSW program. GD in collaboration with True Velocity is also offering 6.8mm polymer-cased ammo for 30-40% weight reduction for the ammo. Other companies competing in NGSW are SIG Sauer and Textron Systems. pic.twitter.com/J9Gx9DS8EF

​Another design, presented by Textron, features a magazine-fed rifle and a belt-fed automatic weapon. The weapons also feature a rare case-telescoped bullet, in which the projectile is partially encased by the propellant that’s ignited to push it out the end of the barrel, saving both weight and space. In addition, the round uses a plastic case, rather than the traditional brass case. A Textron rep told Military.com the automatic rifle weighs “less than 12 pounds,” and the traditional rifle variant less than 9 pounds.

Better view of their NGSW-R carbines. Previously, the most recent image was of the middle example; looks like they’ve refined it a bit pic.twitter.com/uZH43srq5T

​The third bid is by Sig Sauer, which elected a more traditional design along the lines of the M4 because “it’s what soldiers know,” the program’s project manager told Military.com. However, Sig Sauer’s design offers a new feature: a side-charging handle on the non-ejection port side of the weapon, enabling soldiers to charge the weapon without taking their hand off the pistol grip. Sig Sauer’s automatic rifle is belt-fed, like the M249 it would replace and like Textron’s bid, although there’s also an option to use 50-round and 100-round magazines.

However, Sig Sauer also has a big advantage over the others in terms of cost and quality management: it’s not partnering with any other contractors to build the rifle, as it produces all the parts in-house.

​According to the prototyping agreements reached in early September, each of the three firms will provide 43 versions of the NGSW automatic rifles and 53 NGSW rifles, as well as 845,000 rounds of 6.8-millimeter ammunition, to be used during testing. While the Army will weigh the option of using the new 6.8-millimeter round recently unveiled by Texas munitions maker True Velocity, as noted above, some potential options use different rounds.

The Army’s solicitation request for the NGSW chose the 6.8-millimeter round as a balance between the speed and low weight of the 5.56-millimeter bullet it’s been using for half a century and the penetration power and stability of the older 7.62-millimeter round, which tends to be favored by European armies and those of the former Eastern Bloc, Popular Mechanics noted.

However, the 6.8-millimeter is even rarer than the 5.56-millimeter was when the Army selected the XM-16E1 as its new standard weapon in the mid-1960s, which became the M-16. Like soldiers then, those using the NGSW would be unable to obtain ammunition for their rifles except rounds specifically produced and supplied to the Army, blocking US troops from sharing equipment with other NATO allies.