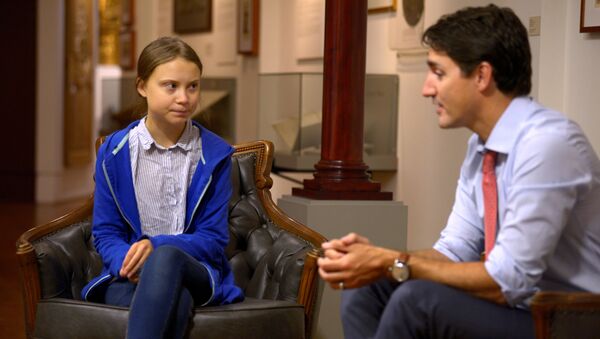 © REUTERS / Andrej Ivanov
Subscribe
Incumbent Canadian Prime Minister Justin Trudeau and his Liberal party lost their overall majority in the cpuntry's Federal Parliament in the elections on Monday but remained the largest party with a plurality of the votes cast.

Denis Rancourt, PhD, researcher for the Ontario Civil Liberties Association, comments on the latest Canadian federal election results, mulling on the main narratives of the election, the role of third parties and more.

Sputnik: Before the election, NDP Leader Jagmeet Singh stated that he would try to form a coalition government with other parties if the Conservatives win the most seats in the election, but fail to secure a majority. But now, since the Liberal Party has to form the minority government, how likely is it that NDP forms a coalition with the Liberals?

Denis Rancourt: It is very unlikely that the NDP will form a formal coalition with the minority-government Liberals. Singh himself has now publicly distanced himself from this scenario.

Canada has benefitted greatly from minority governments in the past, because such governments have survived by finding support on an issue-by-issue basis, rather than formal coalitions, which are only necessary in the most precarious configurations. In this case, given the outcome of the election, the Liberals can pass an issue in Parliament with the support of either the NDP or the Bloc Québécois. Either is sufficient. This is good for democracy and good for Canada. It allows leverage from more differing positions that are significantly represented in the population.

The type of minority government that was elected is structurally more democratic than a majority government. It gives decisions that are anchored in a wider voter base than in most majority governments under the present “first-past-the-post” system. More importantly, the supporting party on a given issue (NDP or Bloc) will seek to satisfy its base, rather than simply allow the dominant party to disregard the public and satisfy its friends and elite backers. Majority governments in our system have too little accountability.

Sputnik: It has been four years since Justin Trudeau declared that the federal election of that year would be the last conducted under the first-past-the-post system. Why did the Liberals abandon electoral reform? Are there any chances that now they will keep their past promises

Denis Rancourt: The Trudeau promise of introducing proportional representation, in some measure, was evidently a shallow and disingenuous election promise. Sectors of the elite capture a government in Canada via a well-oiled machine, which is premised on the first-past-the-post undemocratic process. Proportional representation is less vulnerable to capture and more resilient against monochromatic viewpoints.

It is difficult to imagine an establishment party (Liberals, Conservatives) ever actually moving in this direction without being forced to do so. It would have to come from a minority government, and would require media fairness rather than the kind of mainstream media hegemony that we see with “climate emergency”. The result would be more just laws, with less loopholes that prevent the protection of ordinary citizens.

Sputnik: The Bloc Québécois unexpectedly outperformed the NDP, which according to polls was in third place in terms of the number of voters. What do you think is the reason for the success of the Bloc Québécois?

Denis Rancourt: More than any other province, Quebec has an earned reputation for voting strategically, and to the greatest advantage of Quebec. When it was time, Quebec put the NDP on the map like never before, under a prior NDP leader (Jack Layton) that it trusted. Now it has become clear to many Quebec residents that the present talented leader of the Bloc is trustworthy and will give Quebec more balance within Parliament than would staying with the NDP that has fallen flat in the province, and is compromised by its English-Canada priorities.

Furthermore, Quebec resents being characterised by English-Canada as racist for having unanimously passed a law disallowing any religious dress or symbols for its provincial government public-service workers. It views this as a matter of separation between church and state, and it thus seeks to avoid public tensions at government offices serving the public. The NDP has cast itself in the strongest position of “anti-racism” of any party. Singh vehemently and repeatedly attacked Trudeau for his blackface racism that Singh said harmed all visible-minority Canadians. Whereas, Bloc leader, Yves-François Blanchet, made a point of insisting that he does not believe Trudeau is racist for his use of masks and costumes in his youth. Political correctness is not as strong a social phenomenon in Quebec as it is in English-Canada. This may have played a role.

Sputnik: In your opinion, how justified are the carbon taxes introduced in some provinces by the Trudeau government? How do you rate his emissions reductions policy?

Denis Rancourt: This election was historic, in that the surviving government survived by promising to impose an entirely new tax, to save the planet no less. The incumbent government survived: despite an ethics scandal in which it violated the democratic principle of separation of state and judiciary (although it arrested a Huawei executive to serve an illegitimate USA trade war, while feigning impossibility of intervening), despite negotiating a new economic subservience agreement with the USA, secret to the public behind closed doors and made under duress, despite destroying foreign relations with both China and India (more than one third of the global population), and despite its leader’s proven crass racial mockeries of the past.

In this sense, arguably, the face of foreign intervention in the latest Canadian federal election was the face of Greta Thunberg. The influence of “climate” NGOs and their backers was palpable. The carbon question was widely promoted by the media as being existential, while any critics were cast as being anti-science, and as probably having their mental capacities impaired by racism. The leader of the Green Party Elizabeth May said during the English leaders’ debate: “You can’t argue with physics”, and literally played out the Thunberg “How dare you!” performance before a national audience.

During the leaders’ debate hosted by the French state-funded media (Radio Canada), one of the keynote journalists (François Cardinal, La Presse) opened his question with the false information that “given the scientific consensus of a climate emergency…”, and no one batted an eye. The leader of the People’s Party, Maxime Bernier, was a lone voice questioning this incredible assertion of a scientific consensus that there is a global climate emergency, and he lost his own seat in the election (it was also discovered and nationally reported that the Conservative Party had hired a hit-firm, Daisy Group, to covertly poison social media with suggestions of racism regarding the People’s Party).

In my opinion, the carbon tax is both a diversion of the mind and a manipulation of the national priorities. There is no empirical evidence that a carbon tax can reduce a country’s fossil-fuel usage, which is directly tied to its domestic and industrial economies. Meanwhile, none of the major issues that should concern the nation were addressed in the election: economic sovereignty, social division between working class in precarious employment and urban professional class, social division between trampled rural inhabitants and urban elites, horrible conditions of decay and subservience on the aboriginal reserves and territories, socio-economic and integration challenges from mass immigration into city centers, socio-economic causes of the national sub-replacement fertility rate, vulnerability to harm from future USA economic catastrophes, over-dependence on the USA economy, lack of an independent foreign and trade policy in a changing world that is detaching from USA monetary hegemony, a virtually inexistent manufacturing base, predation by foreign investors versus domestic expertise, and so on. There are not even national institutions for the objective study of these fundamental questions of national interest. Meanwhile, the public is generously nourished on the fodder of “climate emergency” and “anti-racism”.

Sputnik: In June 2019, Trudeau cabinet approved construction of the Trans Mountain project which has potential damage to the environment and marine life.  How does the launching of this project contradict Trudeau’s environment-oriented policy?

Denis Rancourt: Any Canadian government, whether Liberal or Conservative or anything else, must solve the problem of Alberta’s land-locked fossil-fuel reserves, by running pipelines east or west. The fuel reserve can fetch only a hugely deflated price, and serve only to subsidize the USA economy, unless it can be exported to Asia or Europe or both. Thanks to the research of Vivian Krause, we know that USA foundations tied to USA big-oil have massively funded NGOs to tar (pun intended) the Alberta oil-sands as excessively “dirty”, and to demonize all pipelines.  This interference by social engineering dovetails into the global propaganda campaigns driven by the global financiers that want a global carbon economy, to their benefit. The resulting climate religion is so successful that few politicians dare to question it. “Pipeline” has become the technological equivalent of a racial slur.

Trudeau’s stated justification for Trans Mountain is that Canada needs the added revenue from pipelines “in order to fund the transition to a fossil-fuel-free economy”. An inside source informs me that Trudeau ordered a large economic study for costing the “transition”, in preparation for the election. To my knowledge, the costing study was never released. Funding the “transition” is of course nonsense. The real issue is survival of Canada (Alberta separatism is even in play) and economic sovereignty. The partly-Alberta-based Conservatives openly want pipelines, whereas the Liberals disingenuously “don’t really want pipelines”.

In all of this, Quebec is making the eastern route difficult by playing a game of wanting large carbon-transfer payments for producing electricity rather than oil or gas. Quebec is a mega-producer of hydro-electricity. It has the negotiating stance of rejecting any pipeline through its territory, presumably as leverage for the said transfer payments or for hefty transit charges. Meanwhile, Quebec is prepared to build pipelines between its own regions, and it has large shale-gas deposits that it plans to exploit in the future.

The Trans Mountain pipeline would go through British Columbia for access to the Pacific Ocean. All pipelines can leak, just as any transport can leak. Pipeline spills are smaller than supertanker spills, and spills on land disperse much more slowly than spills on water. The shipping would be out towards Asia rather than along the coast. There is already much oil-tanker traffic off the coast from Alaska. There would not be a largely increased risk of an environmental spill. Such is the normal cost of having an economy. Much greater and uncontrolled environmental and human costs arise from unethical Canadian mining operations abroad, Canadian participation in destabilizing the Middle East, such as the war in Yemen, Canadian arms sales, Canadian support for undemocratic governments, such as in Haiti, the breaking of diplomatic relations with Iran and Syria, the dumping of Canadian plastic and garbage into developing-world jurisdictions, under the guise of recycling, mercury poisoning of aboriginal reserves, mass glyphosate use on crops, sewage and used waters into waterways, flooding by reckless economically-motivated damn management, under the cover of “climate change”, and so on. There is much to do before we shut down Canada’s economy over a pipeline or shipping-risk fetish. Domestic ownership and control, and fair taxation are more vital questions.