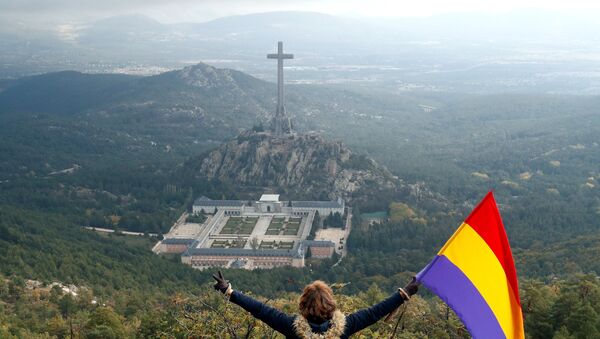 © REUTERS / JON NAZCA
Subscribe
Francisco Franco - who called himself El Caudillo (The Leader) - ruled Spain with an iron hand from 1939 until his death in 1975. Many Spaniards still revere him while half the country view him as a fascist dictator and war criminal.

The body of Spain’s long-time dictator Francisco Franco has been exhumed from a grandiose mausoleum in the Valley of the Fallen on Thursday, 24 October, and taken by helicopter to a more obscure cemetery.

Spain’s Socialist Prime Minister Pedro Sanchez has made the exhumation a priority but his critics say he is carrying out now in order to win votes in next month’s general election.

Sanchez said: "It is a great victory for dignity, memory, justice and reparation -- and thus for Spanish democracy.”

For anyone who tells you Spain has moved on and forgotten Franco on the day he is exhumed and reburied... pic.twitter.com/FYHrkoGuiv

​A poll in the newspaper El Mundo on Monday found 43 percent of Spaniards were in favour of the exhumation but 32.5 percent were against it and social media was similarly divided on Thursday.

Franco was a Spanish Army general who launched a military coup in 1936 in order to remove a left-wing government in Madrid.

Franco’s body leaves his giant fascist mausoleum to rest in his old palace.

Meanwhile, the Spanish Supreme Court legally considers him as head of state of Spain since October 1936 (in the middle of the civil war).

And all this while apology of fascism is still legal. #facts

​The government forces, known as republicans, resisted and Spain was forced into a bloody civil war which Franco and his right-wing Nationalists eventually won. 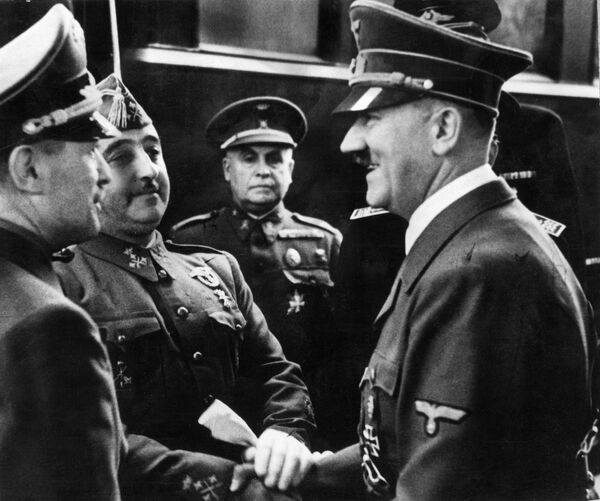 Franco, who had been backed by Nazi Germany and Mussolini’s Italy, imposed a fascist-style dictatorship but resisted overtures from the Axis leaders and kept Spain out of the Second World War.

He stamped out dissent after the war and ruled until his death in 1975, after which King Juan Carlos was restored to the throne as the head of a constitutional monarchy.

One of Franco’s ministers, Manuel Fraga, later formed the People’s Party (PP) which became the main conservative party in Spain and was in government until last year when Mariano Rajoy lost a vote of confidence. The PP’s leader Pablo Casado - who was born in 1981, six years after Franco’s death, has opposed the exhumation of El Caudillo, as has the late dictator’s family.

​[Tweet: "It would be good if, in addition to showing the indignation of Franco’s multimillion dollar family, television reporters interview a relative of the hundreds of thousands of persecuted, imprisoned, tortured and murdered during the dictatorship"]

Franco's body was buried in a basilica in the Valley of the Fallen, 30 miles north west of Madrid, which became a shrine for the right.

The Valley of the Fallen, which contains the bodies of 30,000 republican and nationalist victims of the civil war, was built by forced labour between 1940 and 1960.

​​[Tweet: "Some see the exhumation of Franco as a “democratic victory”. I, as a historian, see it as a resurrection. Never, since Franco died in 1975, has El Caudillo been so present in Spanish society. We have regained resentment and hate and destroyed reconciliation."]

A crane had to lift a concrete slab weighing 1,500 kilograms before the coffin could be lifted out of the ground. It was taken by helicopter to El Pardo cemetery, where it will be buried alongside his wife Carmen, who died in 1988.

The Franco family has resisted the exhumation but has lost several legal challenges and 22 relatives have been invited to witness the exhumation.

​[Tweet: "I’m sorry, but while you thought what to do with me I escaped from my grave. Signed: El Caudillo"]

Franco's descendants had wanted his body left alone or moved to a crypt at the Almudena cathedral in central Madrid, where his daughter is buried.

Franco was a Spanish nationalist and stamped down hard on Basque separatists but Spain is now riven by a new division, with Catalonia chomping at the bit for independence from Madrid.