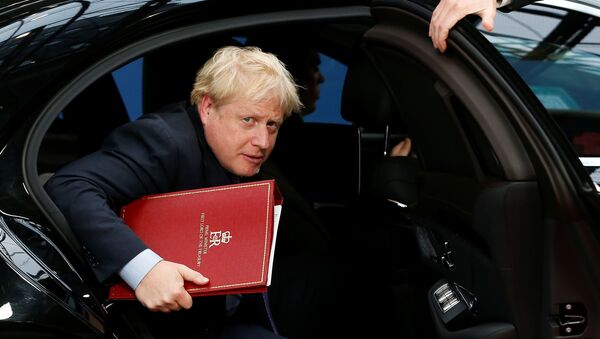 A general election has been looming in the United Kingdom in recent months, ever since Prime Minister Boris Johnson ascended to his post as prime minister without going to the country. The prospect became even more likely following the loss of his working majority in September and his string of losses in Parliament.

UK Prime Minister Boris Johnson has forsaken his original proposal to "die in a ditch" instead of asking for an extension beyond the 31 October Brexit deadline on Thursday, telling MPs that they will have more time to debate his Brexit deal if they agree to a general election on 12 December.

Reports that the cabinet would go on strike if the opposition Labour Party refuses an election began to circulate on Thursday evening as well as rumours that it would pull it's 7 November budget as the cabinet prepares to dissolve.

Latest: Boris Johnson's Govt has threatened to go on strike if Labour refuses a Dec 12 election on Monday. PM’s spokesman said: “Nothing will come before Parliament but the bare minimum. We will pursue a general every day from then onwards, and do everything we can to get it”.

Govt cancels the Budget ——
Treasury source says: "Parliament has voted for a delay. We're calling for an election, so we won't be delivering the Budget on November 6."

The decision has been met with varied reactions however, with Scottish National leader Nicola Sturgeon condemning the proposal saying that "elections should be exercises in letting voters decide, not devices for charlatans to get their own way".

So Johnson appears to be saying to MPs ‘if you vote for an election, I’ll bring back my bad Brexit bill and try to drag us out of the EU before we go to the polls’. Elections should be exercises in letting voters decide, not devices for charlatans to get their own way.

​Labour Party figures say they welcome a general election once a "no deal Brexit" is taken off the table.

Labour backs a General Election once an extension is secured and No Deal is taken off the table. Our party of 500,000 members & millions of trade unionists will run the campaign of a lifetime to return a Labour Government for the many.

​Commons leader Jacob Rees-Mogg told MPs confirmed in parliament that the government would on Monday table a motion calling for a general election.

Shadow leader of the House Valerie Vaz said that Labour would support an election "once no-deal is ruled out and if the extension allows" and offer the PM its support for a "proper timetable" to be placed under appropriate scrutiny.

The prime minister wrote to opposition leader Jeremy Corbyn, saying he will give Parliament a last opportunity to “get Brexit done” by 6 November and table a motion on Monday under the Fixed-term Parliaments Act asking for an early general election. MPs would then vote on the motion the same day.

Johnson said: “An election on 12 December will allow a new Parliament and government to be in place by Christmas. If I win a majority in this election, we will then ratify the great new deal that I have negotiated, get Brexit done in January and the country will move on.”

​Johnson told the BBC's Laura Kuenssberg: "I'm afraid it looks as though our EU friends are going to respond to Parliament's request by having an extension, which I really don't want at all."

"So, the way to get this done, the way to get Brexit done, is, I think, to be reasonable with Parliament and say if they genuinely want more time to study this excellent deal, they can have it but they have to agree to a general election on 12 December."

When asked what he would do if the opposition refused an election, he said: "We would campaign day after day for the people of this country to be released from subjection to a Parliament that has outlived its usefulness".

Johnson was forced to send an unsigned letter to the EU asking for an extension last week after Parliament voted against his time table on the basis that they needed more time to debate the details.

The prime minister repeatedly said that he was determined to get the UK out of the European Union.

According to the fixed term parliament act, once a general election is called by a prime minister, it requires a two-thirds majority in Parliament to pass. The opposition has shot down 2 previous attempts to call an election but has said that it would call an election once the Brexit deadline is extended.

An election before a withdrawal agreement is decided will likely see the Brexit issue take centre stage, with Johnson campaigning for his withdrawal agreement, the Labour Party proposing a second referendum, and the Liberal Democrats offering to scrap article 50 entirely.

Whichever party wins may determine the direction of Britain's future for decades to come.