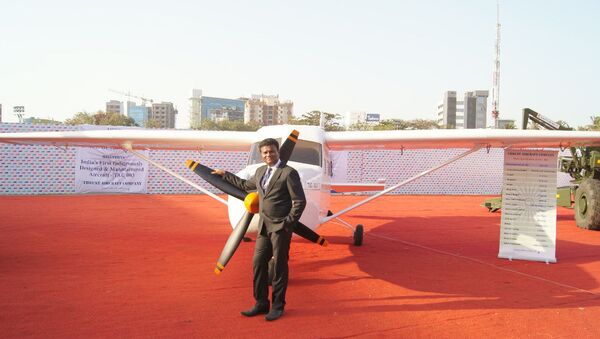 Shweta Sharma
Sputnik correspondent
All materialsWrite to the author
New Delhi (Sputnik): A commercial pilot in India appears steps away from revolutionising the aeroplane manufacturing market in the country after realising his dream of constructing a domestically made plane from scratch on the rooftop of his home, 19 years after his struggle began.

Amol Yadav, 43, from the Indian state of Maharashtra built a six-seat aircraft at a five-storey house and is now planning to launch India's first aeroplane manufacturing company.

Yadav revealed that he plans to establish India's first civil aeroplane manufacturing unit, which will be a joint venture with the Government of Maharashtra.

Yadav realised his long-standing dream on the rooftop of his five-storey residential building in Mumbai, where he lives with 19 family members. He said initially many perceived his project as sheer madness, but his family supported him even before the project's launch.

Unfortunately, India still hasn't dived into the in-house plane manufacturing business, despite being the fourth largest aviation market in the world in terms of passengers, behind the US, China, and Japan.

"We are completely dependent on foreign countries for buying aircraft which makes it very expensive for the aviation sector and in turn affects the price of tickets for passengers," he said.

Talking about the high prices of air tickets for passengers, Yadav said he has decided to manufacture planes in India and make flying more financially accessible for people.

"Right now we have built our first six-seater plane, and we will be making aeroplanes with higher passenger capacity, if we manufacture in India, it will be economical for the people compared to current prices. It will make a huge difference and make flying pretty economical," he said.

He also stated that such a step should have been taken sooner.

Yadav recently fulfilled his dream by flying his aircraft after getting regulatory clearances from aviation watchdog DGCA (Directorate General of Civil Aviation).

A decade after his struggle and two unsuccessful attempts, Yadav was heartened to not only receive clearance to test-drive his plane, but also to be acknowledged by Prime Minister Narendra Modi.

"I have received a permit to fly after a lot of struggle, and I am happy that my struggle was also acknowledged by Mr Modi". He added, "Mr Modi assured me that he would fully support me in my future endeavours for my project."

In 2009, Yadav started working on his third plane, after he was unable to complete his first plane and DGCA rejected permission for his second plane. Last year Amol signed an Rs.35,000 crore ($5.4bn) agreement with the Maharashtra government to continue with his initiative.