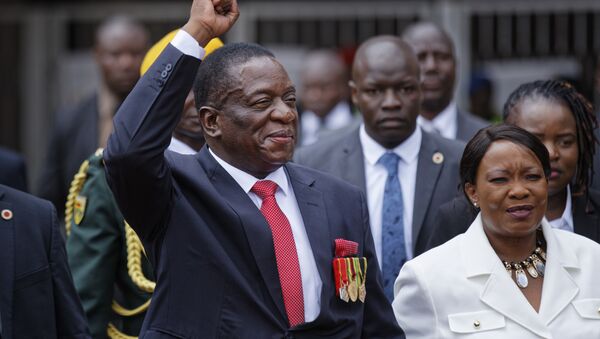 "No, we don't have any specific military equipment that we are seeking, but we continue to collaborate", Mnangagwa said ahead of the Russia-Africa Summit in Sochi.

Mnangagwa further elaborated that he expects to advance Russia-Zimbabwe dialogue at his second meeting with Russian President Vladimir Putin during the Russia-Africa Summit in Sochi.

The two-day forum opens on 23 October. According to Kremlin aide Yury Ushakov, 43 leaders of African countries will attend the event.

In January, when Mnangagwa came to Russia for his first meeting with Russian President Vladimir Putin, the Zimbabwean leader said that his country plans to continue its defence and security cooperation with Russia, but first needs to build up funds to buy "state-of-the-art" Russian weapons. He stressed that Zimbabwe does not have the money to purchase expensive defence systems, but will possibly turn to Russia once it gains more economic means to buy what it wants.

"At the end of the day Zimbabwean problems are Zimbabwean and will need Zimbabwean solutions", Mnangagwa stated.

He stressed that "if the necessity arises" his country would ask the 16-nation Southern African Development Community for help before turning to the African Union.

"But at present, we have not faced any problems which we as Zimbabweans are unable to surmount", the president argued.

The statement comes after the Movement for Democratic Change, the main coalition of Zimbabwean opposition parties, called for an independent mediator to help resolve its row with the government over how to solve the country's economic crisis, after denying direct talks were underway.

The Zimbabwean economy has been in recession, which the government blames on decades of Western sanctions. The economic crisis has been exacerbated by a severe drought this year, with a third of its rural population being food insecure, according to the United Nations.

The Zimbabwean president continued by saying that Russian companies have expressed interest in mining for gold in Zimbabwe and some have already started exploratory work in the southern African nation.

"We also have some Russian companies that are interested in mining gold, and they already started exploration, and they identified several sites where they are going to mine gold", Mnangagwa noted.

The Zimbabwean leader recalled that a Russian company is already involved in platinum mining in Zimbabwe, and stressed that he would like to see more follow suit.

"A Russian mining company is coming to mine platinum. We are very happy that this is now happening, but we want more and more Russian companies to come to Zimbabwe", he said.

Alrosa, a Russian group of mining companies that set up business in Zimbabwe, has already completed exploration work at a mining site close to Harare, the Zimbabwean President Emmerson Mnangagwa recalled.

Zimbabwe and Russia's Rostec signed a mining lease agreement in January to launch a joint platinum development project that was agreed on back in 2014. The Russian-Zimbabwean platinum venture, Great Dyke Investments (GDI), is a joint venture of Russian Vi Holding, through its JSC Afromet subsidiary, and Zimbabwe's Landela Mining Venture. GDI is developing the Darwendale platinum project near Harare, the second-biggest platinum field in the world.