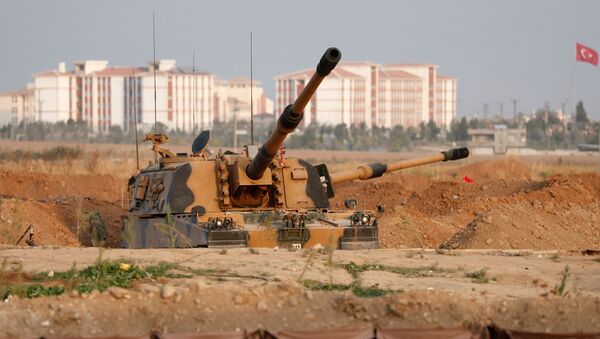 Turkey is still ready to repel “terrorists” despite the halt of its offensive in northeast Syria, Turkish Foreign Minister Mevlut Cavusoglu said in a statement on Wednesday.

"Yesterday we received a message from the United States saying that terrorists had completely withdrawn from the area. However, it does not mean that there are no terrorists there. They could be hiding in tunnels or other places. We took the US guarantees into account and halted the operation, but that does not mean that it is over", Cavusoglu told the Anadolu news agency.

The minister added that the Turkish military will stay in the field to fight the remaining terrorists and clear the area of weapons stashes and trap mines.

Following the announcement, President Erdogan warned that the offensive could be re-launched "even more strongly" if Washington should "break its promises" under a truce deal.

On 17 October, Turkey and the US reached a 120-hour ceasefire agreement to allow Kurdish forces to leave the “safe zone” imposed by Ankara in areas of northern Syria.

Ankara's military operation sought to push Kurdish forces away from the Turkish border as a means of creating a 30-kilometre “safe zone”.

The offensive has been strongly condemned by both the international community and the Syrian government.