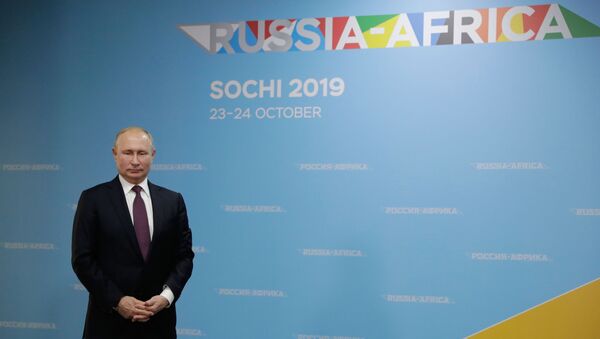 Tim Korso
All materials
The North African country is still embroiled in a bloody civil war that is being waged between the UN-backed Government of National Accord based in Tripoli and the Libyan National Army, which is fighting on behalf of the so-called eastern "Tobruk government", as well as various minor groups, including Islamists.

The foreign minister of the "Tobruk government", Abdel Hadi Hwej, has called on Russia to set up negotiations for Libya similar to those that were held recently in Sochi to resolve the situation in Syria.

"We hope that Russia will play a more important role in the resolution of the Libyan crisis. Russia is an active member of the UN and a great global economy", the minister said.

He argued that Libya has great potential as a "northern gateway to Africa", which remains and will remain unused as long as security issues in the country remain unresolved. The minister added that Libya and other troubled countries, namely Cameroon and Nigeria, must stop importing and producing weapons and instead concentrate on other things.

"We must focus on economic and social issues. 60% of African society consists of young people. First and foremost we need strategic and effective international partnership to change the situation", Abdel Hadi Hwej said.

Russia Has Great Opportunities in Africa

The foreign minister also praised the Russia-Africa Summit and Economic Forum, which was held in Sochi on 23 October, adding that it was long overdue, as Russia has a significant advantage when it comes to operating in Africa.

"Russia has never had a colony in Africa, and thus there is no heavy burden of the past [standing in the way]. On the contrary, all ties have been strategic, like between equal partners. This is why [Russia and Africa] have great opportunities to cooperate", he said.

Abdel Hadi Hwej added that Russia is expected to return to Libya, where it could invest in rebuilding its infrastructure, roads, power grid, and in the construction of railroads.

Following the death of long-time Libyan leader Muammar Gaddafi, the country wound up divided between numerous groups fighting against each other, with the biggest two being the UN-backed Government of National Accord (GNA) based in Tripoli and the former House of Representatives in Tobruk, backed by the Libyan National Army (LNA).

The head of the LNA, Field Marshal Khalifa Belqasim Haftar, called the GNA terrorists and vowed to cleanse Tripoli of them in April 2019, commencing an offensive to seize the city. However, he has so far not succeeded in this endeavour.