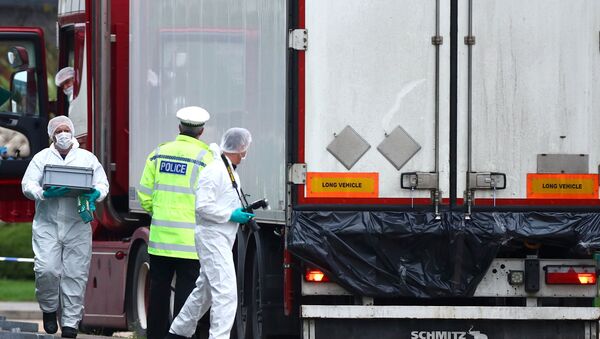 Under European Union rules heavy goods vehicles are allowed to travel freely between any of the 28 members states. In the event of a no deal Brexit, lorries from the EU will probably be subject to border checks.

Investigators are probing the route a Bulgarian lorry took before ending up in Grays, Essex with 39 dead bodies inside.

The lorry’s driver, a 25-year-old man from Northern Ireland, has been arrested on suspicion of murder.

Essex Police initially said the truck had entered the UK on Saturday, 19 October, via the port of Holyhead in north Wales, suggesting it had entered by ferry from the Republic of Ireland.

​We have set up a casualty bureau for people to call if they are concerned about relatives following the incident in #Grays.

​But later on Wednesday, 23 October, the police confirmed it had entered the UK from Belgium.

Essex Police said it had actually entered the UK at Purfleet, not far from Grays, from the Belgian port of Zeebrugge.

"After further enquiries, we now believe that the trailer travelled from Zeebrugge into Purfleet, and docked in the Thurrock area shortly after 12:30am this morning," said a police statement.

​Lorries crossing the channel are one of the most popular routes for people traffickers, who sometimes pay drivers to smuggle migrants in the back of their trucks.

In June 2000 the bodies of 58 Chinese migrants were found in the rear of a lorry at Dover docks.