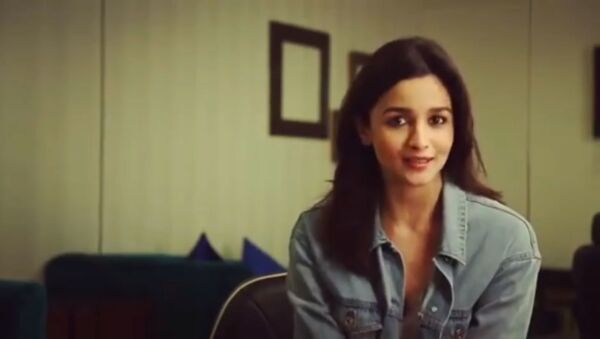 © Blogger photo Alia Bhatt/YouTube
Subscribe
New Delhi (Sputnik): A viral wedding invitation supposedly from one of Bollywood’s most talked-of couples – Alia Bhatt and Ranbir Kapoor – became the talk of the town for many movie buffs on Indian social media, before it was revealed as a prank.

The cream and gold coloured wedding card stated that the “It couple” of Bollywood were set to tie the nuptial knot on 22 January 2020 at the Umaid Bhawan Palace in India’s palace-city of Jodhpur where Priyanka Chopra had married Nick Jonas last year.

​However, several errors in the card that seemed intentional gave away the fact that the invite was actually fake.

To name a few, the names of the "would-be" bride and her father were misspelt in the card as “Aliya” and “Mukesh” when their real names are “Alia” and “Mahesh”.

The wedding date also had a grammatical error and was indicated as the “22th” instead of the 22nd.

On Tuesday, when Alia was spotted at Mumbai airport, reporters asked her to comment on the wedding invite that was grabbing eyeballs on social media.

Although Alia did not say anything, the question did make her break into a loud and blushy chuckle.

According to reports, Alia's mother and uncle, former actress Soni Razdan and Director Mukesh Bhatt have strongly reacted to the news, while urging the media not to give "these miscreants more publicity than they deserve”.

Ranbir and Alia had made their first official appearance together last year at actress Sonam Kapoor’s wedding reception. Both have confirmed their relationship publicly and are often snapped with each other’s families.

On the work front, the duo will bedazzle the silver screen with young Director Ayan Mukherji’s mythological drama titled “Brahmastra”, slated for release on Christmas this year, and featuring the legendary Indian actor Amitabh Bachchan as well.

the one with all the joy 😇💥