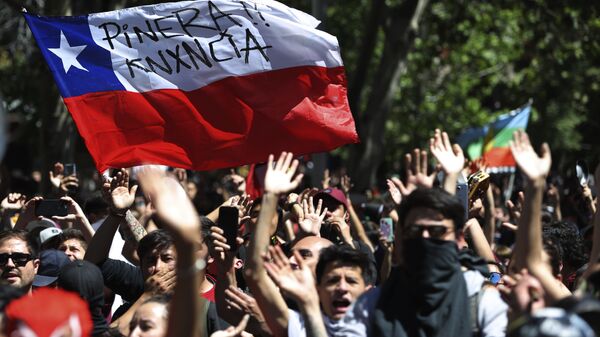 The President addressed the nation in the wake of the violent protests, and apologized for his failure to foresee the social crisis, as he announced a set of measures aimed to improve the economic and social situation.

"This social agenda will not solve all the problems that afflict Chilean families, but it is a large and significant effort to improve the quality of life," the President said in a televised statement. "I recognize this lack of vision and I apologize to my compatriots."

The demonstrations, which were initially aimed against increase in subway ticket prices, started on 6 October and quickly grew into violent rallies, clashes with law enforcement, and public unrest, in which at least 15 people have died.

The increasingly violent nature of the public rallies forced the authorities to declare a state of emergency and then impose a curfew in the provinces of Santiago and Chacabuco, as well as in the municipalities of Puente Alto and San Bernardo on Saturday.