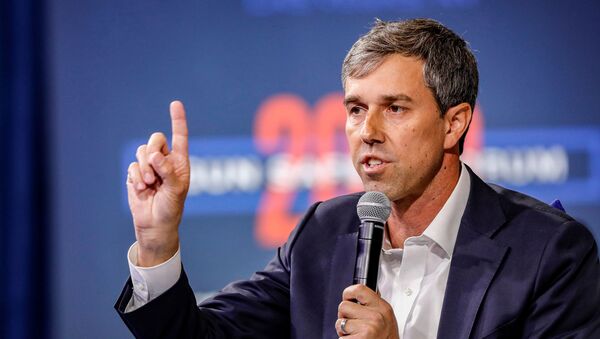 Beto O'Rourke, currently running to be the Democratic candidate in the 2020 presidential election, has throughout his campaign made repeated comparisons between the Trump presidency and Adolf Hitler's Nazi Germany.

During the interview O'Rourke was pressed on how he would bring the Republicans to his side on different issues after using harsh language to describe the party throughout his presidential campaign. He answered: “I don’t think that speaking the truth and calling things by their right names is in any way disqualifying in being able to do work going forward"

"I think sooner rather than later, a majority of Americans — including Republicans — are going to see Trump for who he is, and this administration for what it’s done". "Outside of the Third Reich, give me another example of a Western leader who has called people of one faith inherently defective or dangerous or disqualified from being successful in that country,” O’Rourke stated.

He expanded by rhetorically asking "How did a modern country, well-educated, a source of innovation and ingenuity, and a source of moral leadership in the world, descend into that level of barbarity, producing a shame that lives with every single German to this day?”

O’Rourke referenced an example from a Trump campaign rally earlier this year during which the president laughed in response to a member of the crowd shouting that illegal immigrants crossing the US-Mexico border should be shot.

O'Rourke accused Trump of "giving the green light" to a fanatic in Texas who killed 22 people in a mass shooting at a Walmart in El Paso, Texas, in August.

The presidential hopeful received significant backlash for his comments with some pointing out several errors in his comparison.

Radio personality Mark Levin responded to O'Rourke by calling the latter's comments "ridiculous" and describing the candidate as a "jackass". "People being rounded up and transported against their wishes to extermination camps where their teeth, their skin, and their hair is used to make products, no that's not where we are."

Beto O’Rourke’s outrageous, offensive and dangerous rhetoric comparing the US to Nazi Germany.

​It is not the first time that O'Rourke has compared the US president to the Nazis. During an interview with MSNBC on Monday, he claimed that Trump may be "inspired" by Joseph Goebbels and the propagandists of the Third Reich.

Al Sharpton asks O'Rourke if that's what he really said, to which O'Rourke responded: "That's right"

Nearly everything O'Rourke says in this clip is a complete lie pic.twitter.com/nZPrWQJMO0

​Fellow Democrats suggested that O'Rourke was prioritizing his public image over being an effective politician. On 11 October, New York Representative Max Rose accused the candidate of being a "rock star" and making radical proposals instead of focusing on winning, during an interview with New York Magazine on October 11.

“I don’t think losing is cool. I want the Democratic Party to be the party of Kyrsten Sinema and not the party of Beto O’Rourke,” Rose said.

O'Rourke has made it a consistent tactic to draw a Third Reich comparison with the Trump administration, making similar comments during a rally of supporters earlier in the year. In July he clashed with Meghan McCain over his description of a North Carolina Trump rally as an “impromptu Nuremberg rally”.

​O'Rourke is currently running to be the Democratic candidate to face Trump in the 2020 presidential election. He previously made a name for himself after losing to incumbent Texas Senator Ted Cruz in the 2018 midterm elections.