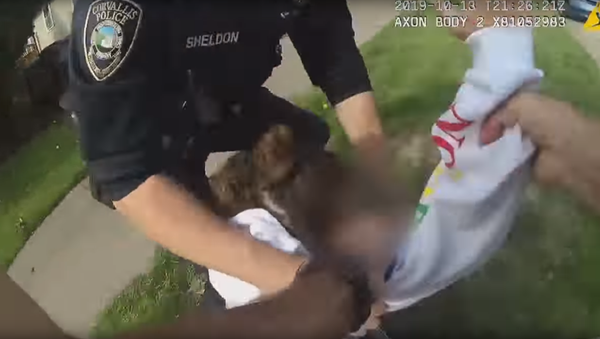 Oregon State Police (OSP) have now released body camera footage of a controversial bicycle stop in which a would-be warning for a minor moving violation escalated to an arrest which Oregon State University (OSU) says is “troublesome” and the local NAACP chapter is labeling aggressive and biased.

Genesis Hansen, a 21-year-old OSU student, was stopped by an OSP bike cop on October 13 for allegedly riding her bike against traffic, rather than traveling with the flow of other vehicles as required by law.

Though the stop began with the officer planning to issue Hansen a warning for her violation, Hansen’s refusal to identify herself quickly snowballed, and the officer later said that she would be given a citation. Another officer, belonging to the Corvallis Police Department (CPD), later arrived on the scene.

After Hansen continued to request written proof of why she needed to turn over her ID, the CPD officer produced a handheld law book and allowed the OSP officer to explain what laws Hansen had violated.

In an effort to show transparency, the OSP released footage recorded with the arresting officer’s body camera on October 21.

Around the 21:00 minute timestamp, the OSP and CPD officers are seen tackling Hansen to the ground before demanding she roll over so they can place her in handcuffs. At this point, bystanders verbally intervene and are told to stay back while the officers subdue Hansen.

"She was basically just standing there, and soon as they said they were going to arrest her and she stepped back, and these two men who were over a foot taller than her, just lunge at her and tackle her to the ground," witness Paige Negrete, who is a fellow OSU student, told Portland’s KATU News concerning Hansen’s arrest.

"Even when they had her on the ground they were still on top of her, until we were all yelling at them saying, ‘you don’t need to be on top of this small woman - you’re two grown men, that’s ridiculous.’"

On Tuesday, one day following the bodycam footage’s publication, Angel Harris of the Corvallis/Albany NAACP branch held a press conference in which she called on the OSP and CPD to apologize for their handling of the situation.

"Too many stories similar to Genesis Hansen, except some of them are not alive today to tell it," she asserted.

It was also announced last week that Benton County District Attorney John Haroldson would not be pursuing any of the charges against Hansen. The same day, OSU announced it would be reviewing its contract with the OSP.

"Let me be clear, this matter is sufficiently troublesome that unless its resolution is satisfactory to OSU," asserted President Edward J. Ray, “we will reassess the value of continuing a campus law enforcement service agreement with Oregon State Police."

It’s unclear whether the arresting officer will be reprimanded for the incident, but the OSP claims to be reviewing the footage.

“As an agency that is committed to eliminating racial profiling and implicit bias in policing, these allegations are being meticulously reviewed, and we are compiling as much information as possible,” the OSP said to KATU following the video’s release. “The agency understands the importance of vigorously investigating these allegations and is taking a serious look at the incident.”