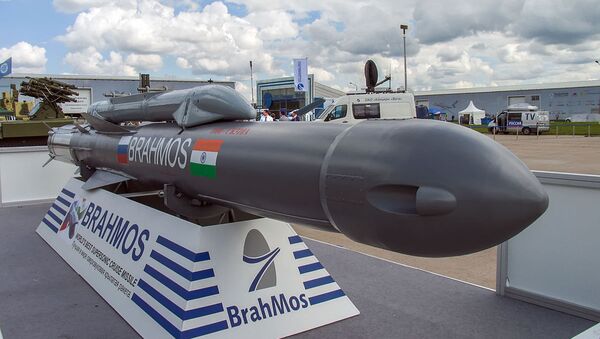 CC BY-SA 3.0 / Mike1979 Russia / BrahMos missile
Subscribe
New Delhi (Sputnik): Amid persisting cross-border firing for the past many days, India has successfully carried out two tests of BrahMos surface-to-surface missiles from mobile launchers in the Andaman and Nicobar Islands.

Conducted by the Indian Air Force, the tests came amid reports of mounting tensions along the western corridor.

“The missile engaged the designated mock targets close to 300 km away. A direct hit on the target was achieved in both cases”, the Indian Air Force said in a statement issued on Tuesday.

The Air Force claimed that the missiles had hit the targets with pinpoint accuracy on Trak Island, a part of the Andaman and Nicobar Islands.

It added that the firing of the missile has enhanced its capability to engage ground targets with pinpoint accuracy from a mobile platform. “The twin firings have been carried out as a part of the routine operational training”, the force added.

02 BrahMos Surface to Surface missiles were fired by IAF at Trak Island in the Andaman Nicobar group of islands on 21 & 22 Oct 19. The twin firings have been carried out as a part of the routine operational training. pic.twitter.com/i95AS0XMXm

​Interestingly, the Air Force conducted the test a day after India, as claimed by India's army chief, destroyed terror launchpads in Pakistan-administered Kashmir.

Nevertheless, Pakistan on Tuesday took as many as 22 foreign diplomats along with media to the Line of Control (LoC), the de-facto border that divides India and Pakistan. The visit was meant to convey to the foreign countries that the artillery shelling by the Indian side on Sunday had actually targeted civilian areas in Pakistan.

Indian Army Chief General Bipin Rawat has claimed at least four or five Pakistani soldiers were killed, while several launchpads/terrorist camps were destroyed on Sunday on the Pakistani side of the LoC.

Meanwhile, an Indian Army officer was killed by Pakistani snipers in Jammu and Kashmir’s Nowshera sector.

In the Poonch sector (on the Indian side of Kashmir), officials accused Pakistan of heavy shelling that left two civilians wounded.

India and Pakistan have struggled for control over the Kashmir region — the southern part of which is administered by India and borders Punjab — since the end of British rule in 1947. Tensions in the region spiked in February after terrorists staged a deadly attack on Indian security forces.

The situation worsened in August when India revoked the special status of the Jammu and Kashmir state and divided it into two federally controlled union territories. Pakistan expressed concern over this and promised to protect Kashmiris. Islamabad then expelled the Indian ambassador, halted bilateral trade, and promised to raise the issue with the International Court of Justice.