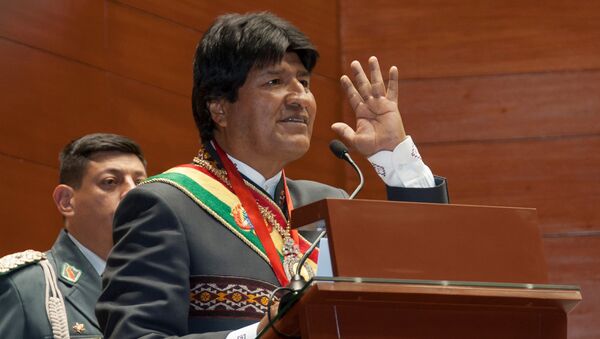 Police used tear gas on demonstrators gathered in the capital city of La Paz, in front of a government building where the vote count was being carried out on Monday, according to local media.

According to media reports, protesters who claim the vote count is a fraud, set fire to electoral offices in the cities of Oruro, Tarija, and Sucre.

​Morales is leading with a 10.12 margin over rival Carlos Mesa, who has 36.74 percent of the vote, with 95.09 percent counted, the Bolivian newspaper El Deber said on Monday evening, citing data from the country’s Preliminary Election Results Transmission (TREP) system.

​​The country's Supreme Electoral Tribunal said later on Monday night that with 95.43 percent of the votes counted, Morales had 46.86 percent, while Mesa had 36.72 percent of the vote, leaving Bolivia's incumbent president with a 10.13 percent margin.

​​Mesa has refused to recognise the election results and said on Monday night, as quoted by El Deber, that Bolivia’s election authorities were guilty of "fraud".

​To win the first round of the presidential elections in Bolivia, a candidate must receive over 50 percent of the vote, or, as an alternative, at least 40 percent with a margin of 10 percent from their closest opponent.

Morales, Bolivia’s first indigenous president, has been in power since 2006. His main challenger, Carlos Mesa, served as president from 2003-2005.