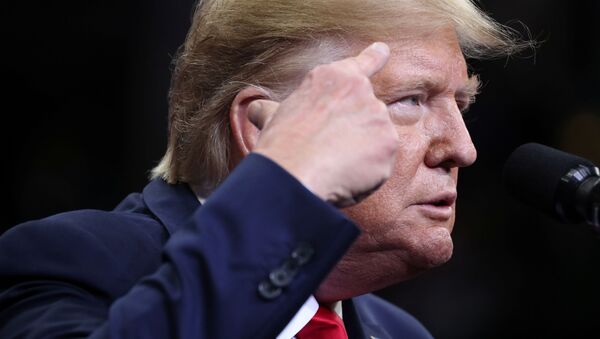 Tim Korso
All materialsWrite to the author
The POTUS has repeatedly slammed the ongoing impeachment proceedings against him as a "witch hunt", arguing that the Democrats have no evidence to substantiate their claims, but are still preventing him from being able to fully carry out his duties.

US President Donald Trump has once again levelled harsh criticism against attempts by Democrats to impeach him over alleged abuse of power, calling it a "lynching […] without due process or fairness". He further warned the Democratic Party that the next time they have a Democrat as president, they could get a taste of their own medicine, promising that the Republican Party won't forget what the Democrats did to theirs.

At the same time, Trump argued that he and his party would win in their struggle against the Democrats' impeachment efforts.

So some day, if a Democrat becomes President and the Republicans win the House, even by a tiny margin, they can impeach the President, without due process or fairness or any legal rights. All Republicans must remember what they are witnessing here - a lynching. But we will WIN!

Trump's choice of words to describe the impeachment proceedings against him didn't go down well with a significant number of netizens in the US, where the word “lynching” is closely associated with extrajudicial killings of African-Americans in the country's southern states. The hashtag #Lynching started trending on Twitter in the US, securing third place.

Emmett Till was a 14-year-old boy boy who was falsely accused of sexual harassment by a white woman in Mississippi and then brutally lynched. That’s what a lynching looks like without due process. His mother held an open casket funeral to show the world what American racism is. pic.twitter.com/udxXhGF7JH

THIS is a lynching. Do not normalize Trump's use of the word and apply any other meaning to it. Trump and his equally racist & syncophantic followers are delving this country into deepening darkness with each passing day #Lynching pic.twitter.com/eiPP46VVSC

Some people, however, argued that Trump clearly used the word to describe a new, modern type of lynching, and not to desecrate the memory of those who fell victim to physical lynchings in the past.

You don't have to be black to know what a #Lynching is. @realDonaldTrump is right, this #ImpeachmentTaskForce is a Political Lynching.

Others argued that the Democrats in the future deserve to be treated the way they have treated Trump.

The Democrats believe they are above the law.

They don’t understand the blowback will be quite damaging.

They won’t like it when they’re on the receiving end.

Oh and they will be!

One netizen noted that the Dems may have set a dangerous precedent that could threaten every US president from now on.

That is absolutely correct, the Democrats want to turn the process on its head. Every President from this point forward will be in danger of being #impeached because the other party simply lost the election.

This is a dangerous time in our history!

A group of House Democrats initiated impeachment proceedings in late September based on a whistleblower complaint alleging that Trump had abused his powers in a conversation with Ukrainian President Volodymyr Zelensky. Democrats claim that POTUS withheld military aid to Ukraine in order to pressure Zelensky into investigating allegations against Joe Biden, a frontrunner in the Democratic primaries.

The publication of the complaint revealed that the person who filed it only had third-hand knowledge of the conversation’s contents. At the same time, the transcript of the talk revealed scant evidence substantiating claims of Trump "pressuring" Zelensky to investigate Biden.