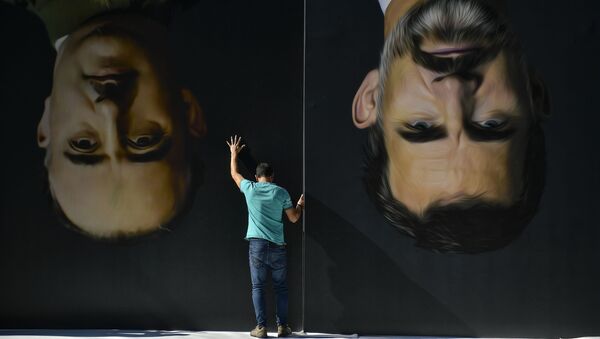 Tommy Sheridan
All materials
After years of debate and legal wrangles, the so-called Socialist government of Spain has decided to exhume the remains of the former Spanish fascist dictator, Francisco Franco, and relocate them from the grand and imposing mausoleum at the Valley of the Fallen complex to a cemetery near Madrid, where the Franco family have a crypt.

The move is designed to remove any semblance of respect for the murderous regime of Franco that his place in the major mausoleum may unwittingly signify, and instead promote the Valley of the Fallen as a tribute to the 500,000 men and women who lost their lives during the brutal Spanish Civil War of 1936-39. The reality is that Franco’s ghost, not just his remains, has tragically returned to Spanish politics.

General Franco came to power on the back of a military coup against the democratically elected government of Spain in 1936. The Popular Front government was Republican and opposed to the monarchy, the privileged Catholic Church and all its friends in the landed gentry and aristocratic wealthy families who sought to keep the landed peasants, ordinary workers and women enslaved in deplorable living conditions and under the heel of the Church’s authority, which promoted subservience to the unequal and unfair status quo. 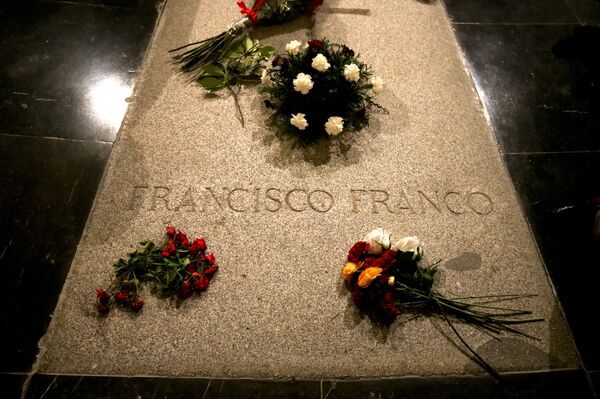 Franco waged a brutal war against the poorly armed Republican forces and committed many atrocities in an attempt to frighten his opponents into surrender. The Republican forces lacked armaments and artillery, but they were fighting with the ideals of freedom and social liberation on their side. They fought valiantly, but Franco was able to call on his fascist friends Hitler and Mussolini for help and that outside interference proved crucial in driving back the Republican resistance. Without the intervention of Hitler’s crack Condor air regiment and the essential artillery and military personnel supplies from fascist Germany and Italy, Franco would not have been able to secure victory and establish a dictatorship in Spain from 1939 to his death in 1975.

After crushing the Republican forces that were fighting to uphold democracy and the will of the people, Franco unleashed wave after wave of brutal suppressions targeting any and all political opponents in a bloodbath of assassinations and public executions, shamefully supported by the Catholic Church. In August 1936, the Massacre of Badajoz featured a great crowd of rich people and a Mass before the shooting of some 4,000 Republicans.

The Second Spanish Republic was established on 14 April 1931 when the reigning Monarch King Alfonso XIII abdicated and fled Spain. That left the path clear for Spanish lawyer Niceto Alcalá-Zamora to become the first president of the new republic. His government instituted a programme of secular policies that included agrarian reform, the separation of church and state (vehemently opposed by the Catholic Church, desperate to retain its vested power and influence), the right to divorce, women's suffrage (November 1933), the socio-political reformation of the Spanish Army, and political autonomy for Catalonia (November 1932) and the Basque Country (October 1936). 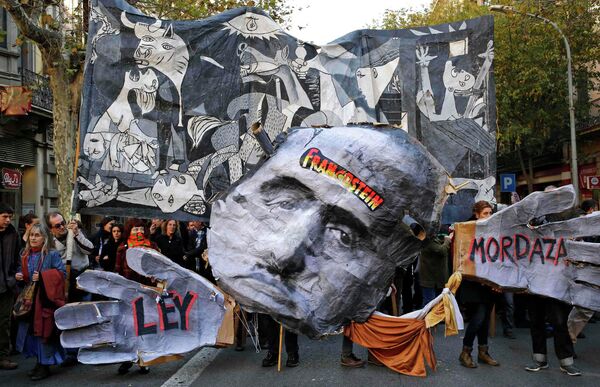 Demonstrators hold a banner featuring a painting of Pablo Picaso's "The Guernica" (back) and a cut-out of former Spanish dictator Francisco Franco (C), during a protest against the Spanish government's new anti-protest security law in Barcelona December 20, 2014.
© REUTERS / Gustau Nacarino

This short summary of recent Spanish history is essential background and context to what is now unfolding within Spain, and particularly in Catalonia. The granting of political autonomy to both the Basque Country and Catalonia in 1936 was part of a broad democratic and progressive series of reforms. Those reforms were about empowering and liberating people formerly subjected to unelected and unaccountable authority and rule. When the Popular Front government won the election in May 1936, Niceto Alcalá-Zamora was replaced by the more left-wing Manuel Azaña and the progressive reforms that challenged the unfettered rule of the wealthy, the Catholic Church, and the land owners were a real threat to the Spanish establishment.

By July of 1936, Spanish Army General Franco had gathered together enough officers and support from the rich establishment to begin an undemocratic and brutal coup that sparked the 1936-39 Civil War and claimed up to 500,000 lives. The attitude and behaviour of the Franco-led Nationalist and fascist forces is acutely summed up by a quote of one of Franco’s captains, which illustrates how reactionary they were. Captain Gonzalo de Aguilera y Munro, a public affairs officer for the Nationalist forces, told American reporter John Thompson Whitaker:

“You know what's wrong with Spain? Modern plumbing! In healthier times — spiritually healthier, you understand — plague and pestilence could be counted on to thin the Spanish masses ... now, with modern sewage disposal, they simply multiply too fast. The masses are no better than animals, you understand, and you can't expect them not to become infected with the virus of Bolshevism. After all, rats and lice carry the plague”, Hochschild, Adam (2016). Spain in Our Hearts. Houghton Mifflin Harcourt. ISBN 978-0-547-97318-0.

Make no mistake, such rotten and reactionary views now pollute the Madrid National Police Force that has been sent from Madrid to Catalonia to quell the popular and peaceful movement for independence. After the crushing of dogged and courageous Catalonian resistance in 1939, Catalonia’s independence was derecognised and they only managed to secure a regional parliament in 1980, five years after Franco’s death. Over recent decades, the growth of the independence movement in Catalonia has been tangible and inspiring. By October 2017, enough of a head of steam had been built to hold a referendum on Catalan independence.

The 1 October poll was organised by the democratically elected autonomous Catalonian Parliament, but had been declared illegal on 7 September by the Spanish government in Madrid. Despite outrageous physical violence and repression by specially deployed police officers and state troopers, who bludgeoned voters lining up at polling stations, removed ballot boxes and threatened voters to stay away, a remarkable 2,286,217 Catalans cast their vote. 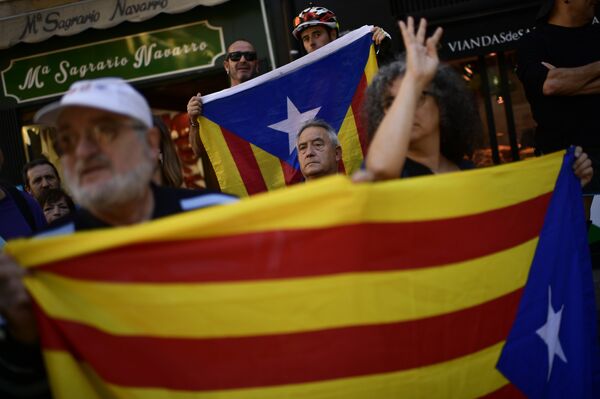 Pro independence trade union worker holds up ''esteleda'' or Catalan pro independence flags, in support of the Catalonia's secession referendum, and against to alleged brutality by police during a referendum on the region's secession from Spain that left hundreds of people injured, in Pamplona, northern Spain
© AP Photo / Alvaro Barrientos

Within weeks, the Madrid government of Spain declared the vote void and set in train a series of prosecutions against the elected politicians involved in the whole process. Just last week, seven judges in the Supreme Court of Spain sentenced twelve selected leaders of the Catalan independence movement to a combined total of 100 years in prison. Former Vice-President of Catalonia Oriol Junqueras was sentenced to 13 years, while former Ministers Raul Romera, Jordi Turull, and Dolors Bassa were all sentenced to 12 years each. They were found guilty of sedition and embezzlement of funds. The speaker of the Catalan Parliament, Carme Forcadell, was sentenced to 11.5 years. The sentences are almost as outrageous as the charges. Sedition for organising a democratic referendum that they had pledged to deliver? That is not sedition - that is democracy.

The sentences have led to an eruption of social protest all across Catalonia, but particularly in Barcelona. The police repression of the protests, both by local and Madrid-despatched police, has been shocking and shameful. The silence of condemnation from the European Union and individual EU member leaders has been disgraceful. A major member of the EU has unleashed the ghost of Franco-era repression onto the streets of Catalonia and the rest of the EU has shamefully remained silent. Sure, there have not yet been mass executions like in Franco’s day, but there have been mass beatings, arrests, and ominous threats which have no place in a supposedly democratic country.

Anyone who doubts the Western domination of the corporate media should contrast and compare the coverage of the Catalonia protests with the Hong Kong protests. In Hong Kong, scores of on-the-ground correspondents are despatched to film the events live and the coordinated condemnation of China is tangible. In Catalonia, the crushing of heads and brutal beatings of unarmed peaceful protesters goes on almost unreported. Spain stands exposed as a rogue nation exhibiting some of the worst excesses of its former fascist past. Not only the EU, but every democratic nation on the planet should be condemning their actions and calling for the release of all Catalan political prisoners. One wonders for a moment what world outrage would be coordinated if such beatings and imprisonments were taking place in Cuba or Bolivia?

The message is loud and clear: release the political prisoners in Catalonia and allow the Catalan people the democratic right to a free and open referendum to decide their future governance. If they wish to vote for their independence, it should be allowed and internationally recognised.