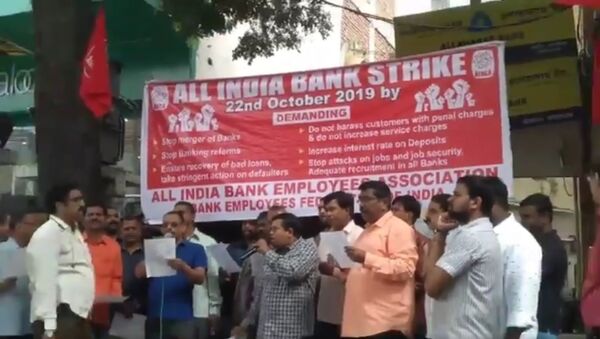 The plan to merge banks was one of several measures undertaken by the Central government to revive economic growth which has been on the lower side for the last five years.

The All India Bank Employees' Association (AIBEA) and the Bank Employees Federation of India (BEFI) are the two unions leading the protest against the recent merger of banks, falling deposit rates and the lack of job security, media reports said.

About 350,000 employees affiliated to these two unions (AIBEA and BEFI) are taking part in the strike.

The bank unions decided to go ahead with their strike after talks with the Chief Labour Commissioner of the Indian Ministry of Labour had failed on Monday.

"IBA (Indian Bank Association) appealed to us not to go ahead with the strike, but could not come out to resolve any of the demands raised by us. AIBEA General Secretary Venkatachalam told media on Monday:

"We made a detailed written submission about the justification for our strike call. In the absence of any positive outcome in the meeting, it was decided to go ahead with the strike," he added.

Such leaders had destroyed the spirit of Union & banking. Selfish leaders holding posts even after retirement.

Most automatic teller machines (ATMs) that provide cash to customers will not be operational as they fall under the ambit of the strike, the striking unions said.

The AIBEA and BEFI both revealed that they are also demanding job security for public sector bank employees and are opposed to the outsourcing of banking jobs and the privatisation of the banking industry.

Additionally, they have demanded adequate recruitment of clerical and sub-staff and recovery of mounting bad loans through stringent steps.

Central Trade Unions (CTU) and the All India Trade Union Congress (AITUC) have extended support to the AIBEA and BEFI for the strike.

Employees of India's Central Bank, The Reserve Bank of India (RBI) are not participating in the strike as they say the merger of public sector banks does not affect them.

The State Bank of India (SBI), regional rural banks and cooperative banks are also not participating in the strike, sources said.

Several banks have expressed concern over providing regular customer services in the wake of the day-long strike but said they are taking pre-emptive steps to ensure smooth functioning.

Last month, two bank officers' unions were planning to go on strike on 17 and 26 September respectively, but later withdrew the strike call after getting assurances from the Central government that their demands would be considered.