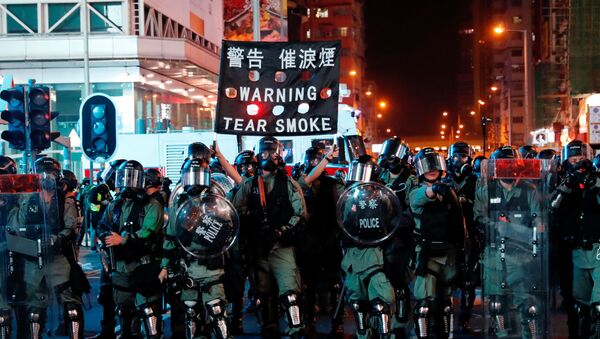 While tear gas is nothing new, Sunday’s crowd control efforts were unique in that they saw the first alleged instance of the Hong Kong Police Force (HKPF) using mainland China-manufactured tear gas. Social media users and outlets reported a number of tear gas brands previously unseen around the city, such as French language canisters from Chinese defense manufacturer Norinco.

According to a September report from the South China Morning Post (SCMP), Chengdu Jin’an Equipment, which is located in the western Sichuan province, and the Guangzhou-based Jing Shi Security Technology & Defence Product Development Ltd. may also be new equipment sources for the HKPF.

Though it may seem likely that Hong Kong’s law enforcement would have previously relied on China for crowd control equipment due to proximity, a large portion of supplies used by the HKPF were imported from the US and UK. However, recent moves by those countries’ lawmakers have impeded imports.

Back in June, then-Foreign Secretary Jeremy Hunt announced that the UK would both investigate the ways in which UK-manufactured tear gas was being used and suspend the approval of future export licenses.

“The outcome of that investigation will inform our assessment of future export licence applications to the Hong Kong police and we will not issue any further export licences for crowd control equipment to Hong Kong unless we are satisfied that the concerns raised on human rights and fundamental freedoms have been thoroughly addressed,” Hunt said in a June 25 address to Parliament. However, it was unclear if this would have an immediate impact, as existing export licenses set to expire in 2020 were not addressed.

Tear gas canisters from the company have appeared in several social media posts and have been seen on the streets following the HKPF’s crowd control and anti-riot efforts.

#HongKong: collection of the different types of tear gas canisters and rubber coatings being used by HK police today. pic.twitter.com/2FomOVYj4w

However, while NonLethal Technologies’ MP-6M5-CS and MP-40L-CS smoke projectiles have a reported “stand-off distance” of 80 meters and 140 meters, respectively, Asia Times reported that the mainland-manufactured tear gas has a 300-meter radius.

Senator Rick Scott (R-FL), who returned from Hong Kong in late September, issued a letter to NonLethal Technologies on October 10, urging the company to cease their exports as the sales are “equivalent to supporting the efforts of [Chinese] President Xi [Jinping] to harm ordinary citizens and peaceful protestors.” The senator also ratcheted up his rhetoric in the memo and asserted that Xi is a “human rights violator and a Communist dictator set on world domination.”

In addition, HR 4270, also known as the PROTECT Hong Kong Act, moved on to the US Senate last week after lawmakers in the House of Representatives passed the bill, which is a bipartisan effort to prohibit commercial exports “of certain nonlethal crowd control items and defense articles and services to the Hong Kong Disciplined Services.”

Reports of Hong Kong tear gas stocks running low come after the city banned citizens from wearing face masks during demonstrations and other forms of public assembly. At the same time, fears surrounding the tear gas’s impact on the semi-autonomous city’s water supply have also been voiced by the public.

To quell suspicions of possible contamination, Hong Kong’s Secretary for Food and Health Sophia Chan Siu Chee announced Tuesday that anti-riot and crowd control efforts had no impact on the quality of the city’s air or water.

“According to the air quality index recorded by the Environmental Protection Department, there are no irregularities from June till now,” she said during a radio broadcast, according to the SCMP. Chan noted the Water Supplies Department did not find reason for concern either.