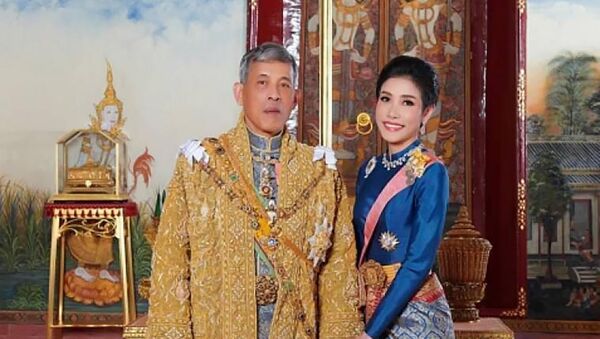 The 34-year-old former nurse-turned royal concubine was granted the special title of Royal Noble Consort during a ceremony this August, as she knelt in front of Thailand’s 67-year-old King Maha Vajiralongkorn in the presence of his wife. This became the first time that the Asian monarchy has admitted to polygamy in almost a century.

Thai King Maha Vajiralongkorn has dismissed Sineenat Bilaskalayani, born Niramon Aunprom and also known as Sineenat Wongvajirapakdi, as his official concubine – a title she was granted in a rare ceremony earlier this year. The 34-year-old consort was stripped of her title “Chao Khun Phra” as well as all military ranks and decorations for “disloyalty to the king” and “acting against the appointment of the Queen for her own ambitions”, the Daily Mail reports, citing the Royal Gazette.

The statement reportedly reads that her behaviour revealed that “she does not give any honour to the king and does not understand royal tradition” and that they “are to benefit herself”. It noted that she aimed to elevate her rank to the position of the king’s lawful wife, Queen Suthida, whom he married just months before appointing Sineenat as his consort. Her behaviour is said to be “deemed disrespectful to His Majesty's grace... and caused divisions among courtiers and misunderstanding among the people”.

“Royal Noble Consort Sineenat is ungrateful and behaves in ways unbecoming of her title. She is also not content with the title bestowed upon her, doing everything to rise to the level of the queen. She lacks the understanding of the good traditions of the royal court. She displays disobedience against the king and the queen”, the statement, cited by the outlet, said.

According to The Straits Times, the former concubine was also accused of misusing the king’s name to gain benefits for herself, sowing seeds of conflict among palace officials and misleading people about her status.

However, the reports do not detail what exactly she did to deserve the severe punishment.

The former nurse, who met King Maha Vajiralongkorn when she was one of his royal bodyguards, received the title of Royal Noble Consort during a kneeling ceremony that made headlines this August, becoming the first woman to be named a concubine of the king of Thailand in almost a century. This took place only a few months after Thai King Maha Vajiralongkorn (Rama X), who has been the monarch since 2016 and been involved in numerous scandals, was officially crowned in May.