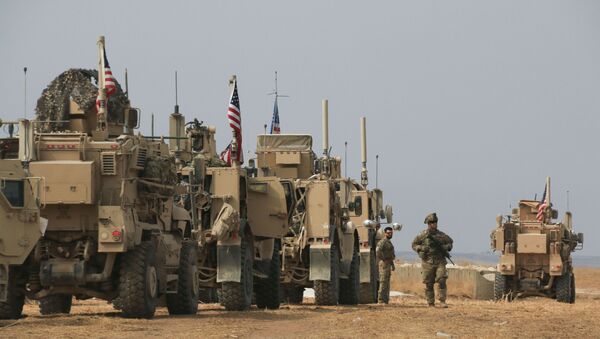 © AP Photo / Baderkhan Ahmad
Subscribe
Donald Trump’s decision to withdraw American troops from the border areas of the war-torn Middle Eastern country, leaving allied Kurdish-backed forces to face a Turkish military operation, has prompted a wave of criticism against the US president. Anger at the move allegedly turned physical in one Kurdish-controlled city.

A US military convoy that departed from the predominantly Kurdish city of Qamishli has been attacked with tomatoes that were hurled by protesting residents, the outlet Rudaw English reports, sharing a video of the alleged vegetable assault. However, the authenticity of the video has not been verified. According to the outlet, local Kurds blocked the path of the American troops, who are set to leave Syria following President Donald Trump’s order.

#Kurdish residents in the city of Qamishli block the path of the American forces withdrawing from northern #Syria and throw tomatoes at them following President Trump's order for the #US soldiers to retreat from the region - ANHA pic.twitter.com/PB513uC8ft

​People in the video are heard shouting "No America" and "America liar" in English. According to the Israeli outlet Haaretz, which translated the footage, one of the alleged residents chanted in Arabic "Like rats, America is running away", while another screamed obscenities and spoke about babies who have died during the Turkish offensive, which was launched this month.

The Associated Press shared a video of a similar action near the town of Tal Tamr, claiming that it shows a group protesting US troops on Sunday. They are seen holding banners, with one man even blocking the path of an American vehicle with a poster reading: "Thanks for US people [sic], but Trump betrayed us".

According to Reuters, over 100 US military vehicles have already crossed the Iraqi border, entering the province of Dohuk in a move earlier announced by US Defence Secretary Mark Esper. He previously stated that around 1,000 American troops leaving northern Syria would be redeployed to Iraq to "help defend" it and to fight a possible Daesh* resurgence there.

Washington announced its plans to pull out its forces from northern Syria just days before Turkey’s military operation. The US move was heavily criticised domestically, with politicians accusing President Donald Trump of betraying the US’ “Kurdish allies", who helped Washington fight Daesh*. Trump defended his decision by arguing that the US must stop participating in "endless wars".

Ankara launched its "Peace Spring" military operation against the formerly US-backed Kurdish militias controlling the area despite international criticism. Turkey claimed that it wanted to clear the territory of the SDF, which is mainly comprised of YPG fighters, whom Ankara considers to be affiliated with the PKK, listed as a terrorist organisation in the country.

PranSa
21 October 2019, 18:56 GMT3
000000
Recently Assad asserted that it is only matter of time for Syrians to throw out the Yankee forces from the Syrian soil. His confidence emanated from the fact that almost all the tribes in eastern, northern and western Syria have pledged that they would fight against the Yankees and the Europeans. The Syrians have already started demonstrating their ire, with vegetables. The hard missiles will be thrown at Yankees soon.