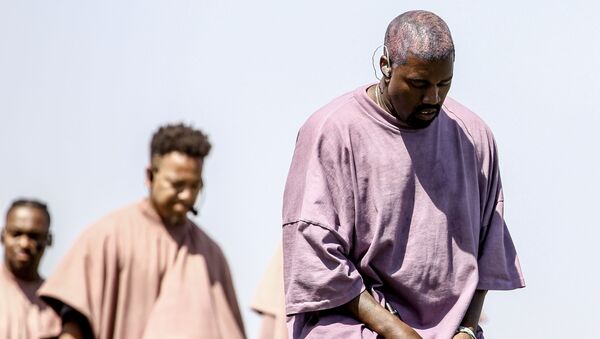 © AFP 2022 / Rich Fury
Subscribe
Kanye West is widely reported to have been going through an eye-opening religious experience, casually trying his hand at Gospel preaching on Sundays. Having been “delivered”, he's married his rapping talent to a conventional church service, arguably on his pastor’s advice.

Kanye West’s pastor from Placerita Bible Church in California, Adam Tyson, has revealed to Christian media organisation Apologia Studios that his newly-minted mentee was done with rap and even gave his, or rather Kanye's reasons:

"One time, he told me that he wasn't going to rap", Tyson shared with the media outlet in an interview. "I said, 'Why not?' He said, 'That's the devil's music'. I said, 'Hey, man. Rap is a genre. You can rap for God'. I think he was already thinking about it a little bit, but I definitely said, 'Hey, bro. I think you need to use your talents that God's given you and use that platform for God'".

As part of the testimony the pastor recounted, Yeezy also shared that he had been feeling the burden of sin that comes hand-in-hand with being a superstar. Referring to the temptations of the pop music industry, the pastor noted:

“The guilt of sin brought him down low. He would say the devil basically brought him to a place where he just felt like he was in bondage to his sin. So he said, ‘I got delivered'".

Tyson admitted that Kanye, who confirmed having recently converted to Christianity, has been moving along a different path.

Since the start of the year, West has been reinventing himself as a semi-religious leader, headlining Sunday Services and preaching Gospel at a church in Wyoming not far from where he lives with Kim Kardashian, as well as in New York, where he is known to have attracted other A-listers from his close circle.

In a recent episode of the Keeping up with the Kardashians, self-styled Gospel rapper and freshly-minted believer West opened up, saying he is deeply hurt by the “vibes” of his super sexy wife, in light of his newly discovered spirituality.

“You are my wife and it affects me when pictures are too sexy", Kanye rapped provocatively, having seconds earlier argued that Kim’s hot looks were affecting his inner “soul and spirit".

Yeezy recently shared BTS footage of his upcoming Jesus Is King IMAX film, which bears the same name as his much-awaited album, set to soon to see the light of day.