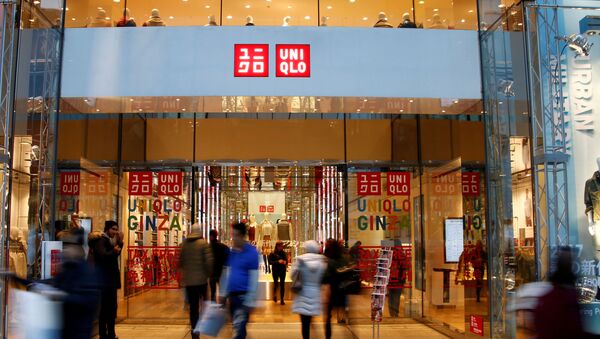 South Korea and Japan have been locked in trade and diplomatic rows, stemming from their complicated history and territorial disputes, for several months, with the most recent scandal only contributing to the strained relationship between two states.

Tokyo-based clothing retailer Uniqlo has pulled an ad from South Korean TV and its YouTube account after it was accused of whitewashing the history of Japanese colonialism and sexual slavery, as reported by AFP.

Despite having diplomatic ties and both being US allies in the region, Japan and South Korean relations remain deeply hurt by Tokyo’s 20th century expansionist policies, an epoch that saw Korean girls used as sex slaves known as “comfort women” during World War II.

The advert in question appeared to reinforce the negative sentiments that many Koreans have due to this chapter in their history, as it featured 98-year-old American fashion celebrity Iris Apfel being asked by 13-year-old designer Kheris Rogers about how she used to dress as a teenager.

However, Apfel’s response, which originally sounded like “Oh my God, I can't remember that far back”, was subtitled by Korean Uniqlo as “Oh my God, how can I remember what happened more than 80 years ago?"

Uniqlo Korea has now withdrawn the controversial ad, which contained a subtitle for words that were not actually spoken, but which reminded Koreans of Japanese imperialism. Uniqlo decided to "pull the ad after accepting that many people felt uncomfortable by it".

As the end of Japan’s colonial rule over the peninsula is now approaching 80 years ago, Koreans reacted furiously to the advert, accusing the Japanese retailer of trying to “silence” their country’s colonial history and ridicule the former sex slaves, with a massive spike in searches for the terms “comfort women” and “Uniqlo advert” on Twitter and the Korea-based portal Naver.

The Uniqlo PR blunder still seems to be a hot issue in Korea this morning with "mockery of comfort women" (위안부 조롱) and "Uniqlo advert" (유니클로 광고) trending on Twitter Korea and Naver searches respectively. pic.twitter.com/mPL5uijt27

“UNIQLO Original Overseas Ads: How can I remember that far back? Domestic Ads: My Goodness, how can I remember something that happened more than 80 years ago? Wouldn't you say this was a mockery of comforting?” one frustrated user asked in Korean.

A number of parody videos have also been circulating on South Korean social media raising concerns over Uniqlo’s advert, while several protests have also taken place outside of the Japanese brand’s shops in the country.

The company was forced to pull the ad following the backlash, but denied allegations of belittling history, arguing that the text was edited in order to highlight the age difference between the individuals featured.

“The advertisement in question is a part of a global advertisement series to mark the 25th anniversary of fleece and it has no links to any political or religious agendas, belief or organisations, but we decided to stop airing the ad as we take it seriously that many people felt uncomfortable”, Uniqlo said in a statement, as cited by The Guardian.

In the meantime, Seoul and Tokyo have been embroiled in a trade and diplomatic row for several months, following the South Korean Supreme Court’s ruling in 2018 that ordered Japanese companies to compensate Korean workers who used to work in mines and factories during the colonial period. Tokyo refused to accept the ruling, prompting a wave of boycotts against Japanese goods around the country, with Uniqlo already being in the list of targeted shops.