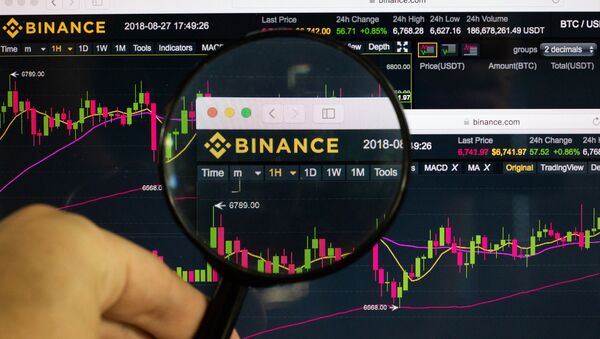 CC BY 2.0 / Marco Verch Professional Photographer and Speaker / Man holding magnifying glass over Binance logo
Subscribe
Since it's launch in 2017, Binance has become one of the world's largest crypto-exchange with 1.4 million-transactions-per-second capability.

"No decentralised exchange today can handle our volume, and none are as secure as we are," its founder, Changpeng Zhao, known as CZ, says. The market seems to buy it: since its July initial coin offering, Binance tokens BNB have soared from about 10 cents to $13, giving it a market capitalisation of $1.3 billion. Zhao, 41, who wears a black hoodie, like some cross between Mark Zuckerberg and Steve Jobs, also owns the biggest stake in the coins.

Sputnik talks to Changpeng Zhao at the VIII International Forum for Innovation Development "Open Innovations" in Skolkovo to find out about China's state cryptocurrency, its impact on the Sino-American trade war, and about the ban on cryptocurrencies. The Binance founder also told Sputnik about his key to success.

Changpeng Zhao: I'm not an expert in international economics, but I can give some very simple guesses, they may be wrong. I'm always very happy whenever somebody creates a cryptocurrency; it doesn't matter what kind of cryptocurrency it is, it doesn't matter so much how centralised it is – of course, the more it is centralised, the better – but any government creating their digital currency is a really good thing, because that promotes other countries to do the same thing, which is good for our industry. Most likely, central government-issued cryptocurrencies are more centralised, so they will not be fully decentralised, like Bitcoin.

But I think the one thing that gives them an advantage, is that they have the trust of the people, [they're liked by] the population, especially for a country like China; and I think that is going to pressure many other countries to follow, which basically means that the education of regular people about cryptocurrency will be done much better than what we currently can do.

So I think that has a tremendous effect on pushing the industry forward; and I think when China issues a cryptocurrency, it will absolutely force the US to consider doing so faster. Because right now the Chinese government very clearly wants the RMB to be dominant world currency; right now it's the US dollar, and the US dollar doesn't want to lose that advantage I'm guessing. So, when those two are fighting, that's good in terms of more people will getting into the currency.

Sputnik: And in your view, will the US try to do something with the Chinese cryptocurrency?

Changpeng Zhao: I hope so, but they have not announced anything. The US is more complex; the US government is actually more decentralised than the Chinese; so the Chinese government has more power centralised at the sort of top, whereas the US has many different departments and agencies.

So, maybe that'll take longer. One thing that's good for us is Libra pushing forward, and that helps the industry to extend because Facebook has a large number of users, if they push a cryptocurrency, it's most likely going to see a very large number of people using it. Again, that's also good for our industry.

Changpeng Zhao: I don't think it affects our plans at all. I think it helps our plans very much because we don't know how decentralised they will be, but they don't prevent us from integrating with it. If it leaves out some kind of a blockchain, we are able to integrate [it] to Binance. That means that now there's an additional channel for people to deposit and withdraw fiat directly onto Binance.

So, today we do it to stable coins mostly, and we have some fiat channels – we have added a US dollar fiat channel, we've added a C to C fiat channel in China, but it's not a very direct channel – so, the more channels we can add to Binance, the better. What that means is that the government is making a digital currency available, that we can integrate [it] directly onto Binance. That will solve our fiat problem.

Sputnik: In the fall of 2017, China imposed a ban on ICOs, as well as suspended trading in cryptocurrencies. How did you manage to maintain and develop Binance and successfully conduct an ICO (initial coin offering)?

Changpeng Zhao: We did our ICO in July of 2017, two months before; in September of that year, the Chinese government said they didn't allow ICOs anymore, and the previous ICOs should try to return the invested funds to the investors. At that time, the BNB price was already 6X the ICO price, so no user wanted to return it for the original investment; they have to be stupid to do that.

So, no one wanted to return it, and we had no way to force users to do that; and also China did not allow cryptocurrency exchanges with our friends in the country. So we just said we would move out of China; this playground doesn't allow us to play anymore, so we'll go somewhere else.

Sputnik: In your opinion, why did Facebook fail to do the same?

Changpeng Zhao: Given that there're so many countries in the world, there's always going to be a spectrum. So, some countries are going to try to ban cryptocurrencies; but I think they're going to find themselves to be extremely unsuccessful because the technology itself, the blockchain technology, is meant to be decentralised.

For example, if you allow an exchange to operate in your country, you can ask for the data from that exchange; whereas if you say that you ban exchanges, people will still trade, but that information will no longer be available anywhere. So far, in most countries right now, there has been no law saying that you cannot hold cryptocurrency because cryptocurrency is not a fiscal item.

So, given that, I think that they are. On the other end of the spectrum, many countries are pushing for very favourable regulations towards cryptocurrency, like Malta, Singapore or Bermuda. All of these countries see this as a chance for them to leapfrog or bypass, to compete with traditional financial industries. So, I think we're going to see two spectrums.

Sputnik: Would you fight for the freedom of Binance if a system of regulations was implemented?

Changpeng Zhao: I always feel that most people want more freedom; very few people want more restrictions. So I think we're living in a world now, where information is relatively free-flowing, but money is not. So I think we're at the stage where we can make this change, the technology is there. And even if we don't do it, somebody else will do it. And making this change will make our world better.

Sputnik: On 7 May 2019, Binance revealed that it had been the victim of a "large scale security breach" in which hackers stole 7,000 Bitcoin worth around $40 million. Is it possible to completely ensure the security of cryptocurrencies while at the same time maintaining an atmosphere of decentralisation? What preventative measures have been taken by Binance to counter such things?

Changpeng Zhao: There are a couple of different points here. Cryptocurrency itself is still very secure; no one has broken the significant line protocol or the Binance chain protocol. The security issue was to do with how Binance manages its internal systems; it was a breach in our store system; it was a large attempted hacker attack by some of the users.

The security is never a hundred per cent. Basically, if a comet hits us, everything is destroyed; so, there's never 100-per cent security. What we need to achieve is a very high level of security, so that similar instances don't happen. And in that regard, we have done a lot of work in the last 4-5 months.

We have completely re-architected our security system. Without going into too many technical details, I'd say that right now we're probably the most secure industry, ironically. Before we had a concept of an internal secured network, right now we have got rid of it. Now we're using what we call borderless security; we don't trust any devices, we don't trust anybody. We don't even trust our employee loggings; we don't trust our administrators.

So, now we have completely revamped the system so that we don't trust anyone, including our employees. We also don't trust our user security; if a user wants to withdraw their own money, they have to go through a very lengthy security check for us to know that it's them and their account hasn't been compromised.

Before we served the user API key on the server, today we don't store it there anymore; we use the asymmetric [version]. The users give us a public key, and that's all we have, and we actually cannot generate orders on behalf of the user. So, we have a lot of these measures in place now. Today, I think the company is more secure than ever before.

Sputnik: As a teenager, you flipped burgers at McDonald's and worked overnight shifts at a gas station. And now your net worth is 1.4 billion dollars, and you are on the Forbes cover. How have you made it?

Changpeng Zhao: To be honest, it was a big surprise to me as well. I think there's a lot of random luck. I do work very hard, and I also attract people who work very hard; so, our teamwork is super-hard. We also hire passionate people, people who believe in our mission. And we don't hire money-driven people.

It's not like I have to earn more money, or I have to do it; it's just that I think it's the most useful and meaningful thing for me to do. I believe that working hard is part of it [success], luck is also part of it; we were very lucky in 2017 when the market of crypto trading was very hot. For me, it took 20 years to create Binance; and with Binance, I think we provided the right product with the right service at the right time, and people like it.

So, we've grown very quickly. But I also think that a lot of luck is just the blockchain; I think that blockchain is going to be the highest-growth industry for the next little while. And when we understand something, we bet on it; and what we bet on is all our time, energy and resources. And I think we're just at the very beginning; this can be a lot bigger.