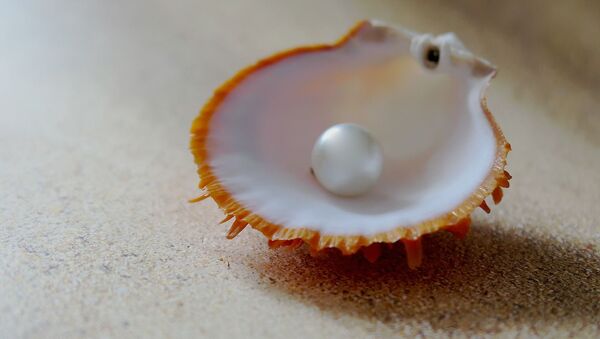 The pearl, which is less than a third of a centimetre in diameter, was uncovered in a Stone Age settlement. The excavation also led to the discovery of ceramics, beads, arrowheads, and other artefacts, which, according to the researchers, were made from the bones of sea creatures such as fish and turtles.

Archaeologists from the UAE’s Department of Culture and Tourism have discovered what they say is the world’s oldest pearl. The beauty was unearthed on Marawah Island, off the capital Abu Dhabi, in ancient ruins. According to the director of the archaeological unit, Abdulla Khalfan Al-Kaabi, the pearl, which is pale pink in colour, is at least 8,000 years old.

The oldest known natural pearl in the world has been discovered by DCT archaeologists working at a Neolithic site on Marawah Island. The 8,000-year-old ‘Abu Dhabi Pearl’ will feature in the upcoming @louvreabudhabi exhibition 10,000 Years of Luxury pic.twitter.com/Kd3jHHCVCT

​Scientists say the find serves as proof that humans have been trading objects since the Neolithic. They believe that pearls were used in trade with people from Mesopotamia, an ancient civilization that existed on the territory of today's Iraq, Syria, Turkey, and Iran. Researchers also claim that pearls were probably worn as jewellery.

The pearl trade also played a crucial role in the UAE’s economy. However, it collapsed after Japan also started to culture pearls. The world’s oldest pearl will be showcased for the first time at the 10,000 Years of Luxury exhibition, which will open at the Louvre Abu Dhabi on 30 October.

"The discovery of the oldest pearl in the world in Abu Dhabi makes it clear that so much of our recent economic and cultural history has deep roots that stretch back to the dawn of prehistory", said Abdulla Khalfan Al-Kaabi.