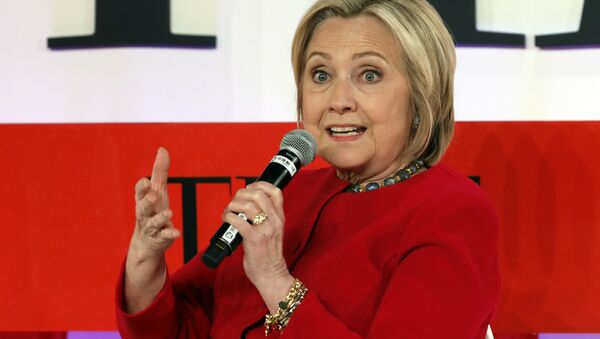 © AP Photo / Richard Drew
Subscribe
In the wake of a Friday inter-Democratic feud between Tulsi Gabbard and Hillary Clinton, who assumed Gabbard was "a favourite of the Russians" for 2020, even the Republican US president weighed in on the hullabaloo.

In a newly published tweet, POTUS took a dig at “crooked Hillary” Clinton arguing she is “at it again". He then recalled her calling Democratic 2020 candidate Tulsi Gabbard “a Russian favourite” and also bringing up Clinton’s typical rhetoric that Trump is “also a big Russia lover".

He opted for a cheeky response this time admitting that he is indeed fond of Russian people, like all the rest of people, before hitting with his verdict on Hillary:

So now Crooked Hillary is at it again! She is calling Congresswoman Tulsi Gabbard “a Russian favorite,” and Jill Stein “a Russian asset.” As you may have heard, I was called a big Russia lover also (actually, I do like Russian people. I like all people!). Hillary’s gone Crazy!

POTUS’s defence of the Democrats at large, a rare occurrence, naturally couldn’t go unnoticed in the comments section:

Hm, you're defending Stein AND Gabbard here. For someone who never has anything good to say about liberals, this is interesting.

A few straight away recalled a hit book and its screen adaptation “One Flew Over the Cuckoo’s Nest":

Hillary is living in her very on version of One Flew Over The Cuckoo’s Nest.

Many wondered how Trump's love for all reconciles with his “calling people names", with one user arguing he should take a break from his misanthropic speeches at least on Sundays:

You can’t say you like all people and then call dems names and declare they are traitors. That’s not how this works.

Can’t you at least give it a break on Sunday, or does every single damn day in your life have to be filled with hate and vitriol?

Another ironically remarked that there is a so-called “Hillary card”  - one of Trump’s trump cards, something POTUS often makes use of to “deflect” bad news:

You can't get Hillary out of you head can you?

Apart from Trump’s comment about his love for the “Russian people", hilarious memes on Clinton also arrived:

I believe this was her response pic.twitter.com/GeS3ls2MC0

“America has noticed Hillary has an unnatural preoccupation with Russia", another user pointed out, while a different one remarked that Clinton had been “exonerated” by Trump’s own state department.

Hillary was exonerated by your State department. Something you can’t say.

Crooked Hillary has a CRAZY obsessive and unhealthy preoccupation with Russia.

America has noticed Hillary has an unnatural preoccupation with Russia.

“To Hillary, anyone that doesn’t hand her a check and or a drink is a Russian agent and or a Racist", another commenter added, with another posting a picture on the subject:

To Hillary, anyone that doesn’t hand her a check and or a drink is a Russian agent and or a Racist.

Delusions...never go away, they just keep coming back over and over and... pic.twitter.com/YnrIAVS1ZX

Some remarked in Clinton’s defence that there was actually no mention of Tulsi’s name:

Hillary never said Tulsi’s name. If Tulsi has a guilty conscience, then I guess that’s why she said Hillary was talking about her. Tick tock

I hope you'll follow the same standard you apply to congressman Schiff, and resign.

On Thursday, former Secretary of State and presidential candidate Hillary Clinton suggested that the Republicans were currently “grooming” a Democrat to become a third party spoiler candidate. With Clinton giving no names, the comment was purported to be targeted at Hawaii Rep. Tulsi Gabbard, previously accused of being boosted by Russia:

"I'm not making any predictions, but I think they've got their eye on somebody who is currently in the Democratic primary and are grooming her to be the third-party candidate", Clinton said, speaking on a podcast with former Obama adviser David Plouffe. "She's the favorite of the Russians", she added.

Gabbard hit back on Twitter on Friday, dubbing Clinton in a very strongly-worded manner “the queen of warmongers, embodiment of corruption, and personification of the rot that has sickened the Democratic Party for so long and have finally come out from behind the curtain".

“I think she didn’t go far enough, and we have to decide whether or not we’ll listen to Hillary Clinton, who lived through this in 2016, or whether or not we’re going to do what we did in 2016, is decide that what she’s saying is irrelevant because of how we feel personally about her, and I think that that would be a mistake", said Maxwell, recounting how “anchors literally laughed” at her when she “said it was Russia".

She urged the public to “listen to us now” bringing up the red banner on her computer system that said during the campaign: “Government hackers are trying to infiltrate your account".

“So, this is a real warning. And I think that we would be smart to listen before it’s too late", Maxwell thundered.

Hillary Clinton, meanwhile, was due to speak in Washington at the 2019 Fortune Most Powerful Women Summit, but at the last minute had a change of heart citing a scheduling conflict as her reason for the pullout.

However, a source close to the Clintons' told Slate that the decision to cancel was made because Kirstjen Nielsen, the former secretary of homeland security, is also expected to speak at the event. Incidentally, Tulsi Gabbard also appears to be one of the speakers attending the summit.