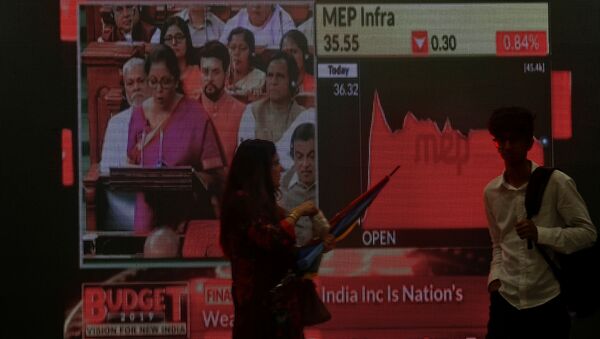 New Delhi (Sputnik) - Despite the global economic slowdown, New Delhi has claimed the growth rate of India and China next year will not be as bad as the current year. In fact, Indian Finance Minister Nirmala Sitharaman has said that “India’s growth is (expected to be) much better than that of even China”.

The International Monetary Fund (IMF) had earlier lowered India’s growth rate to 6.1 percent and said that even while New Delhi had worked on the fundamentals of its economy, there were problems, including long-term drivers of growth that need to be addressed.

Quoting data released by the IMF, Sitharaman said India can look forward to a better growth rate during the next financial year, which would have a positive impact on the global economy.

The global monetary organisation during its ongoing annual meeting in Washington DC had downgraded global economic growth for 2019 to 3 percent, its slowest pace since the financial crisis of 2008. “We estimate that the US-China trade tensions will cumulatively reduce the level of global GDP by 0.8 percent by 2020", said Gita Gopinath, Chief Economist at the IMF.

The global economic downturn has also affected the Indian industry despite efforts by the federal government and business leaders to present a positive picture.

According to the latest data from the Indian Ministry of Statistics and Programme Implementation, the economic slump continues, with industrial production and factory output shrinking to -1.1 percent in August compared to 4.3 percent in July.

New Delhi has introduced a range of market-friendly changes, including withdrawing a surcharge on the income of foreign portfolio investors (FPIs) and reducing corporate tax to boost private investment.

Meanwhile, UN Secretary-General António Guterres has cautioned the possibility of a "Great Fracture" – with the two largest economies splitting the globe into two – with its own dominant currency, trade and financial rules.

He called to do “everything possible” to avert this and maintain a universal system of the economy with universal respect for international law. Guterres’s remark, without naming the US and China came during his address at the World Bank Group and International Monetary Fund Annual Meeting in Washington DC on Saturday evening.