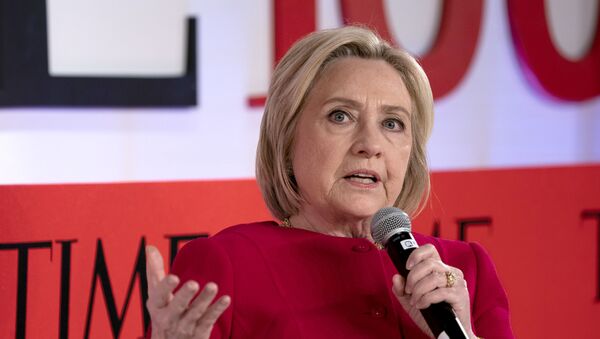 An expected face-to-face meeting between Hillary Clinton and Hawaii Rep. Tulsi Gabbard set for next Friday was averted after Clinton decided not to go to the Fortune Most Powerful Women Summit .

Clinton aides cited a scheduling conflict when she announced her withdrawal from a speaking slot at the annual event, however, a source familiar with the matter told the New York Post that Clinton protested the inclusion of former Homeland Security Secretary Kirstjen Nielson on the schedule.

Yet, the most anticipated event of the meeting was Clinton’s confrontation with Tulsi Gabbard, as the former Secretary of State on Friday accused the Hawaii Democrat of being the “favorite of the Russians” on a podcast.

Gabbard fired back on Twitter, calling Clinton “the queen of warmongers”, “embodiment of corruption”, and “personification of the rot that has sickened the Democratic Party.”

Great! Thank you @HillaryClinton. You, the queen of warmongers, embodiment of corruption, and personification of the rot that has sickened the Democratic Party for so long, have finally come out from behind the curtain. From the day I announced my candidacy, there has been a ...

Democratic hopefuls seem to be divided as to which side they support in the dispute, as Cory Booker offered a GIF of him throwing shade, which prompted Clinton to respond with a mocking GIF of her own. Andrew Yang and Marianne Williamson, on the other hand, came to Gabbard’s defence. “The Democratic establishment has got to stop smearing women it finds inconvenient!” said Williamson. Frontrunners like Joe Biden and Elizabeth Warren, meanwhile, have stayed out of the heated discussion.