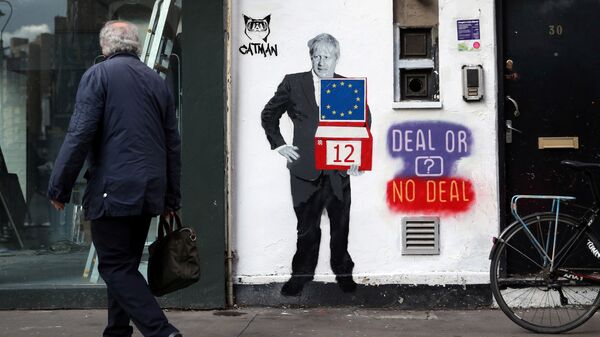 UK lawmakers held an emergency session on Saturday to discuss the Brexit deal worked out by Prime Minister Boris Johnson and the European Union, voting on a measure which would force No 10 to delay the UK's exit from the bloc to a later date.

The European Union will grant a Brexit extension if Prime Minister Boris Johnson sends a letter, Brussels said, according to The Guardian.

Earlier, MPs passed a backbench amendment to withhold support for Prime Minister's Brexit deal, thus ensuring a delay to the UK's divorce from the EU.

Lawmakers voted 322 to 306 on an amendment tabled by independent MP Oliver Letwin withholding approval on the Brexit deal until the necessary legislation to implement it has been passed, thus mandating Johnson to delay Brexit in accordance with the terms of the Benn Act, a September 9 act of parliament requiring the PM to ask the EU to extend the Brexit withdrawal date until January 31, 2020.

But Prime Minister Johnson said he would not negotiate a delay, adding that he could not be legally compelled to do so, and that he was neither "daunted or dismayed" by the result of the vote.

"I will not negotiate a delay with the EU and neither does the law compel me to do so," Johnson said. "I will tell our friends and colleagues in the EU exactly what I have told everyone else in the last 88 days that I have served as prime minister: that further delay would be bad for this country, bad for the European Union and bad for democracy," Johnson said.

Johnson promised to put hold the so-called 'meaningful' vote on Brexit next Tuesday.

Labour leader Jeremy Corbyn said he welcomed Saturday's vote, saying the prime minister must now comply with the law. "He can no longer use the threat of a no-deal crash out to blackmail members to support his sell-out deal."

The European Union reacted to the vote by urging London to explain its Brexit next step. European Commission spokeswoman Mina Andreeva indicated that Brussels had taken note of the vote. "It will be for the UK government to inform us about the next steps as soon as possible," she tweeted.

🇪🇺🇬🇧 @EU_Commission takes note of the vote in the House of Commons today on the so-called #Letwin Amendment meaning that the #WithdrawalAgreement itself was not put to vote today. It will be for the UK government to inform us about the next steps as soon as possible.

During the debate before of the vote, Johnson told lawmakers that the deal his government had managed to hammer out with Brussels would help heal the rift in British politics. He added that there was little appetite left among European Union’s other members to see another delay in the vote.

The UK-EU deal proposed by Johnson came together on Thursday after London proposed a resolution to the so-called Irish backstop issue, which had served as the main stumbling block in negotiations. Johnson called the Irish border breakthrough a “vast, vast, vast step forward.” According Irish broadcaster RTE, which says it has seen a leaked copy of the plan, the solution to the backstop proposes customs clearance sites located between five and 10 miles on either side of the Ireland-Northern Ireland border, and/or tracking devices on truckers’ vehicles monitoring them in real time and using digital customs declarations created online. The proposal also allowed Northern Ireland to continue to align with EU regulations on agriculture, with Johnson calling that measure a major concession on London’s part.

Ahead of the vote, Labour had promised to try to postpone Brexit and force the prime minister to request another extension until January 31. However, Scottish Prime Minister Nicola Sturgeon warned Friday that some Labour MPs might rebel against leader Jeremy Corbyn and support the Johnson deal.

Facing a divided parliament and no majority, the government needed the support of at least 320 of the parliament’s 650 lawmakers to get the deal done. Johnson has made Brexit one of the key planks of his leadership, and colourfully said last month that he would “rather be dead in a ditch” than see Brexit delayed beyond the October 31 deadline.

Oliver Letwin, author of the amendment to withhold support for Brexit until the deal was passed, insisted that his aim was "to ensure that Boris's deal succeeds." Letwin became an independent after being kicked out the Conservative Party for refusing to agree to a possible no-deal scenario.

Donald Tusk, the outgoing president of the European Council, has confirmed the receipt of the United Kingdom's request to postpone Brexit, without specifying for how long it is asking to delay the day of it leaving the European Union.

UK Prime Minister Boris Johnson told on Saturday European Council President Donald Tusk that he would send a letter with a formal request for the Brexit delay later in the day, a source in the European Union said.

"I will not negotiate a delay with the European Union. I will tell the EU what I have told the British public for my 88 days as Prime Minister: further delay is not a solution," Johnson said in the letter, according to Sky News.

Waiting for the letter.
I just talked to PM @BorisJohnson about the situation after the vote in the House of Commons.

"The president held a conversation with the British prime minister and shared his view for the need for a swift clarification," an official at the French presidency said as quoted by Reuters.

The European Union will give a further Brexit delay beyond 31 October if Prime Minister Johnson sends a letter of request but the bloc will not act first, senior officials in Brussels said, as quoted by The Guardian.

Should that happen, President Tusk will consult all 27 Heads of State & Govt on whether or not we will grant one. Extension can only be granted by unanimity. #Brexit

According to AFP, tens of thousands of anti-Brexit protesters from all across Britain have rallied near Hyde Park in London before marching to parliament to demand a second referendum on Brexit.

The UK parliament will continue the debates on the plan of Prime Minister Boris Johnson to withdraw the country from the European Union on Monday, leader of the House of Commons Jacob Rees-Mogg said on Saturday.

“In the light of today’s decision I would like to inform the House that Monday's business will now be a debate on a motion relating to Section 13 (1B) of the European Union Withdrawal Act 2018,” Rees-Mogg said.

The Section 13 (1B) of the European Union Withdrawal Act 2018 says that the withdrawal agreement may be ratified only if the deal as well as the future UK-EU relationship framework had been “approved by a resolution of the House of Commons on a motion moved by a Minister of the Crown.”

#BREAKING: Parliament has voted to delay Brexit again. The Prime Minister will not ask for a delay -- he will tell EU leaders there should be no more delays and we should get Brexit done on October 31st with our new deal so the country can move on. pic.twitter.com/5EE69IuhUO

Poland welcomes today's @HouseofCommons vote not as a rejection of the Withdrawal Agreement but as postponement of its acceptance. We will support a positive approach on EU level to @BorisJohnson government proposal. Avoiding chaotic, no-deal #brexit should be our top priority.

"An agreement has been negotiated. It is now up to the British parliament to say whether it accepts or rejects it," the French presidency said.

“I wonder what we can do to make sure that the Prime Minister ... respects the Benn Act and sends a letter to the European Council seeking that extension… and any failure of a prime minister who thinks he is above the law, well Prime minister, you will find yourself in court," the Scottish politician said after the vote.

The UK House of Commons decided on Saturday in a crucial vote to withhold the approval of Johnson's new Brexit deal, which automatically forces the prime minister to seek an extension. Johnson, however, said that he would not ask for a delay and pledged to deliver the withdrawal by October 31.