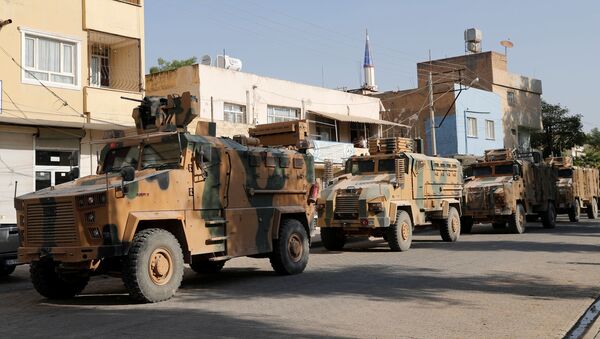 © REUTERS / MURAD SEZER
Subscribe
Military cooperation between France and Russia is being discussed while France's Ambassador to Russia, Sylvie Bermann, has expressed her hope that the Russian President would be able to persuade his Turkish counterpart to halt hostilities in Northeastern Syria.

Emmanuel Dupuy, President of the Institute for Prospects and Security in Europe (IPSE) explains how military cooperation between Paris and Moscow can develop in the light of recent events.

Sputnik: What are the real reasons for the presence of French Special Forces in Syria? Was it not, among other things, to prevent what is happening, namely the Turks from attacking Kurdish strongholds in Northern Syria?

Emmanuel Dupuy: The presence of the French Special Forces has nothing to do with that. France doesn’t recognise the Turkish operation, which questions the fight against Daesh*. The French military is not there to fight Turkey, but to eradicate the last Daesh* centres of resistance.

I’m sure that France will redeploy its troops in Syria. I am afraid that due to the lack of American support (since the US decided to withdraw from Syria), France, like other countries with Special Forces, in particular, Germany, will be forced to relocate their troops.

Imagine a situation: a coalition helicopter with French special forces on board is in the crosshairs of Turkish troops in the Kobanî region, and the French are forced to fight back. If this happened, then the two NATO countries would end up face to face shooting at each other in “self-defence.”

Sputnik: What options can the French military have in this case? Retreat to the territory of neighbouring Iraq?

Emmanuel Dupuy: I don’t know. If there is no active effort to stop Turkey’s advance at the international level, the French may end up between two warring factions. France will have to follow the course of events, that it to quietly observe Kurds being killed and allow Turkey to “dictate its conditions.” I see no option other than do what the Americans did. This is not a desirable option, but a forced one.

Sputnik: What’s your take on France’s appeal to Russia?

Emmanuel Dupuy: I see this positively. This confirms the need to more closely join forces with Russia in creating new security schemes for Europe.

Russia can be an example in this regard. We hope that a joint Franco-German initiative on joining the Astana process will be implemented. French diplomacy plans that.

Sputnik: Some may be surprised by France’s expectations from Russia. Recall that, in addition to the fact that Western countries didn’t want to participate in the Astana process (which you’ve mentioned), they tried to make sure that these negotiations failed. Recall also the hostile statements by the French Foreign Ministry and the Élysée regarding Moscow, when Russia started participating in hostilities in Syria. At that time, France spoke of possible sanctions against Russia. And today Paris is calling Moscow for help.

Emmanuel Dupuy: The strategic context is changing a lot. Emmanuel Macron is aware of this. He’s realised that it’s time to stop the erroneous or deceptive strategy proposed by some French high-ranking officials. They argued that we should support those who are not necessarily stronger at the scene. It is not worth reminding that the Syrian government, regardless of whether we accept it or not, is gradually regaining control over part of the country’s territory.

But now we are faced with the fact that those whom we had to support in the fight against Daesh* (and until now we claimed that we were in Syria to fight it) are not calling us for help. They know we cannot defend them. They call for help from Bashar al-Assad, whom we initially considered a source of destabilisation of the country.

We are trapped by a paradox, which reflects the essence of our inaction. We have no choice. We should side with the one who can influence the Turkish President. This is not about the United States, not about Germany, not about us, the French, but about Russia. 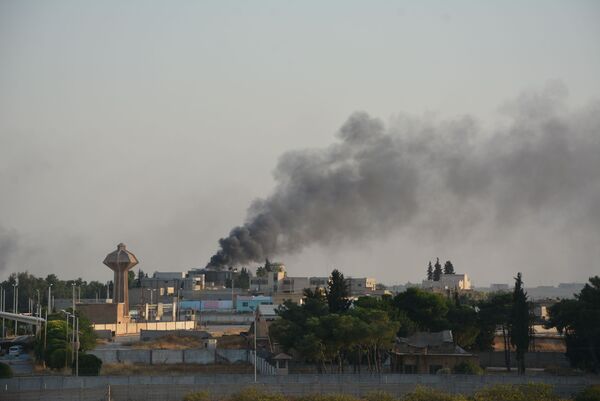 Sputnik: Speaking of the paradox, we supported the Kurds. Their representatives met with Emmanuel Macron at the Élysée in March 2018. Later there was a diplomatic incident when some of these representatives said that France would send troops to “protect” Manbij from Turkey. On the other hand, we never wanted to offend Ankara, for example, when it supported jihadist groups in Idlib. Does France today pay the price of a double game in Syria?

Emmanuel Dupuy: France has always played a double game in Syria. That is why its policy is now in complete contradiction with the strategic reality. The situation is changing for two reasons. Firstly, the US doesn’t support us anymore. Secondly, the United States decided to take care only of itself. If someone is playing a double game, then this is not France, not even Turkey, but the United States.

The United States played a double game, based on the principle that we all have entered the international coalition. In diplomatic terms, we were ready to make it clear that, in addition to the intervention approved by the League of Arab States, in addition to the intervention approved by Russia, there was an international coalition. It fell apart when the American President said he relied on the Turkish plan. From this point of view, we’ve fallen into the trap set by our allies. 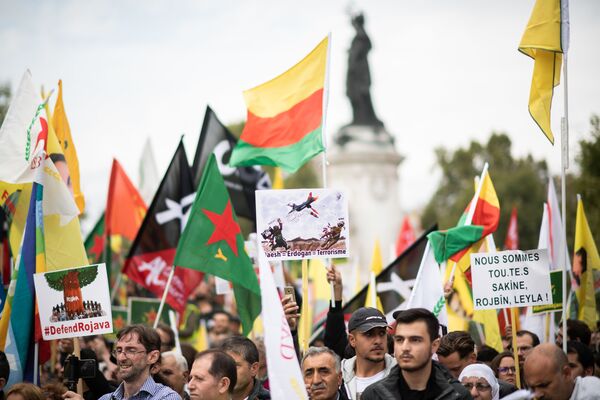 People hold pro-Kurd flags and banner in Paris on October 12, 2019 during a demonstration to support Kurdish militants and protest as Turkey kept up its assault on Kurdish-held border towns in northeastern Syria
© AFP 2022 / MARTIN BUREAU

Sputnik: Does this mean that the French ended up unprotected by the fault of not only the Kurds but also the Americans?

Emmanuel Dupuy: Absolutely. The Kurds were left to their fate from the very start of Turkish operations, from August 2016. The fact that French forces were present in Kurdistan didn’t mean that we were going to defend them and “officially” ensure the independence of the Democratic Federation of Northern Syria (Rojava syrien). I think that, of course, was not in the interests of Turkey, nor in the interests of the Bashar al-Assad regime. He watched with concern as protests for the development of Kurdish autonomy grew into demands for independence. And now everything has changed dramatically. Let me recall that we set two goals for the Kurdish forces (FDS and YPG) and the Kurdish Democratic Union (PYD) party: the anti-terrorist struggle against Daesh* and the protection of thousands of foreign fighters and their families captured and still protected by the Syrian democratic forces. (By the way, according to some reports, about 74,000 people are still in the al-Hol camp, despite the fact that it’s designed for a maximum of 5,000).

However, it’s not yet clear how about 800 jihadists and their relatives recently managed to escape from Aïn Issa camp. Did this happen because the camp guards were redeployed to the front, or because the Kurds intentionally opened the gates of the camp?

The result is obvious, and this causes serious concern: three French women, who fled from the women’s camp and are close to jihadists, have already been “caught and returned to” Daesh*. This confirms Paris’s fears that jihadists will start to disperse.

Depriving the Kurds, whom we “instructed” to monitor approximately 3,000 militants from 54 countries detained from Syria and Iraq, of our support, we must answer for giving our executioners the chance to escape. We instructed the Kurds to monitor them, and the Iraqis to judge them so that we wouldn’t have to deal with this in France. This concerns, first of all, the wives and 150 children of jihadists, whose return France wanted to avoid. Negotiations about their possible repatriation to France or to Iraqi camps are currently being proposed.