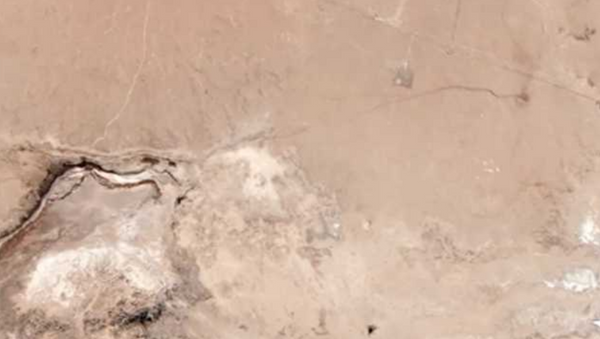 The 160-mile-long Garlock fault that runs northeast-southwest along the Mojave Desert in Southern California has begun moving for the first time on record, according to a study published Thursday by Caltech scientists and based on new satellite radar images.

“This is surprising, because we’ve never seen the Garlock fault do anything. Here, all of a sudden, it changed its behavior,” lead author of the study Zachary Ross, an assistant professor of geophysics at Caltech, is quoted as saying by the Los Angeles Times. “We don’t know what it means.”

According to the scientists, a portion of the fault has shifted about 0.8 inches since July, when two earthquakes took place in the region. The 6.4-magnitude tremor that struck 122 miles northeast of Los Angeles on July 4 was followed one day later by a powerful 7.1-magnitude earthquake that caused a fissure within the Little Lake fault zone in Southern California’s Indian Wells Valley area.

The earthquakes in July, which involved other crisscrossing faults, are believed to have strained the Garlock fault.

"It's going to force people to think hard about how we quantify seismic hazard and whether our approach to defining faults needs to change," Ross said, the Washington Post reported. "We can't just assume that the largest faults dominate the seismic hazard if many smaller faults can link up to create these major quakes."

The fact that the Garlock fault has shifted is unnerving, given that it’s located in an area that can produce magnitude 8 quakes.

According to the Los Angeles Times, it’s difficult to predict whether an earthquake along that fault will soon occur. However, if it does, it is likely to affect the San Fernando Valley, Santa Clarita, Lancaster, Palmdale, Ventura, Oxnard and Bakersfield, as well as Kern County, which is an important area for agriculture and oil production.