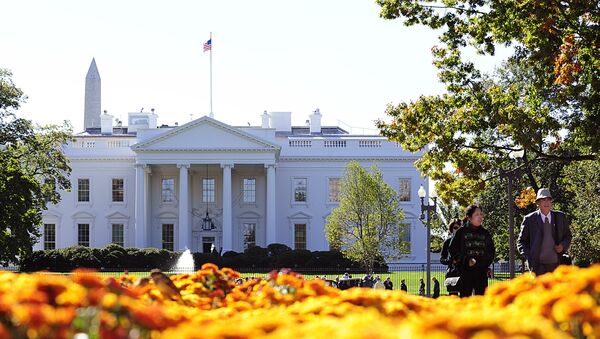 © AFP 2022 / KAREN BLEIER
Subscribe
On Thursday, Turkey agreed to suspend its Syria operation for 120 hours to facilitiate the withdrawal of Syrian Kurdish militia forces to a distance of about 30 km from the Turkish border. The agreement came after Vice President Mike Pence and Secretary of State Mike Pompeo came to Ankara for talks with Turkish President Recep Tayyip Erdogan.

The Syrian ceasefire is working, and both Turkey's president and the Syrian Kurds want it, "and the ultimate solution, to happen," President Donald Trump has tweeted.

According to Trump, the current deal is good for "both sides" and has "a really good chance of success," unlike previous agreements in the Turkish-Kurdish conflict.

Trump then posted an English-language tweet from Erdogan's twitter, accompanying it with the all-caps message "DEFEAT TERRORISM!"

​The US president also tweeted about "big progress being made" after noting that he had "just been notified that some European Nations are now willing, for the first time, to take the ISIS* Fighters that came from their nations."

....I have just been notified that some European Nations are now willing, for the first time, to take the ISIS Fighters that came from their nations. This is good news, but should have been done after WE captured them. Anyway, big progress being made!!!!

Turkey halted its military operation in northern Syria for 120 hours on Thursday night following negotiations between Erdogan, Vice President Pence and Secretary Pompeo. Ankara began the campaign last Wednesday, saying its aim was to establish a security zone in northern Syria and to clear it of both Daesh and Syrian Kurdish militia known as the YPG (People's Protection Units). Turkey considers the YPG to be a terrorist group with ties to the PKK, a Turkish Kurdish political and militia force which has waged a low intensity guerilla war with the Turkish state for several decades.

The United States, its NATO allies, and many other countries do not consider the YPG to be terrorists, and have called on Turkey to immediately halt its offensive in northern Syria. On Thursday, US lawmakers called the YPG forces America's greatest allies in the war against Daesh, and threatened to target Turkey with devastating sanctions on top of those already approved by the White House on Monday.