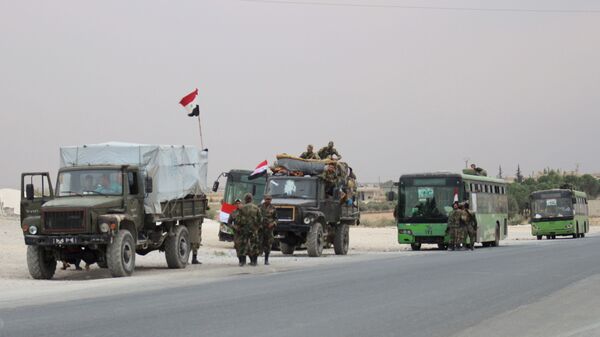 Ilya Tsukanov
All materialsWrite to the author
Turkey’s military operation against terrorist and Kurdish militia in northern Syria has had the unexpected side effect of uniting the Kurdish forces with Damascus, with the sides reaching a security agreement to allow Syrian Army forces to enter Kurdish-governed areas to help defend them against Ankara.

Photos and videos have appeared online showing Syrian Army forces moving into the town of Kobani, aka Ayn al-Arab, a key strategic settlement near the Syrian-Turkish border, with the Syrian Arab News Agency confirming that the deployment has taken place.

The Syrian army raises Syrian flag in #Kobani (Ayn al-Arab) on the Syrian-Turkish border crossing for the first time after five years. pic.twitter.com/Ah0PYByOFd

Just days earlier, it was reported that Turkish forces and their allies were preparing to seize the town from the Kurdish YPG (People’s Protection Units) militia.

Video showing people in Ayn al-Arab (#Kobani) celebrating the arrival of the Syrian Army & Russian Military, to protect them from the Turkish invasion.#Syriapic.twitter.com/3iZ9C0OSfR

The US-led coalition withdrew from Kobani last week, on the eve of the Turkish operation in the area. On Wednesday, a coalition warplane bombed an arms depot at the Lafarge Cement Factory south of the town. Kobani has served as the centre of one of the administrative units of the ‘Democratic Federation of Northern Syria, a de facto autonomous region of Syria established in 2014. Syrian army forces originally left the territory in 2012 as the foreign-backed civil conflict in the country intensified. Between late 2014 and early 2015, Kobani was besieged by Daesh (ISIS)* terrorists, with the terrorists capturing many of the surrounding villages and engaging in ethnic cleansing and other crimes. With support from the US-led coalition, Kurdish fighters took back control over the region between 2015 and 2017.

Last week, after the start of the Turkish operation in northern Syria, Kurdish authorities reached an agreement with Damascus allowing the Syrian government to deploy troops along the entire border with Turkey to try to halt the assault. Later, Russian peacekeeping forces were spotted in the city of Manbij, about 45 km southwest of Kobani, with their mission said to consist of separating Syrian and Kurdish forces in the area.

Amid warming relations between the Syrian government and the Kurds in the country’s north, observers began speculating about the fate of their de facto autonomous status. On Thursday, Bouthaina Shaaban, a senior advisor to Syrian President Bashar Assad, said Damascus could not allow for the creation of a formal autonomy for the Kurds because of Syria’s diverse ethnic and religious makeup.

Sporadic clashes between Turkish and Kurdish Syrian forces continued on Friday, after the United States and Turkey reached an agreement on a 120-hour ceasefire in northeast Syria to allow YPG forces to withdraw. Turkey says its operation aims at establishing a security zone in northern Syria, and to prevent the operations of YPG fighters it says are allied the Turkish Kurdish PKK militia, whom Ankara classifies as terrorists. Damascus has slammed Turkey’s operations, accusing Ankara of “aggressive intentions” and saying it won’t tolerate the violation of Syria’s territorial integrity.