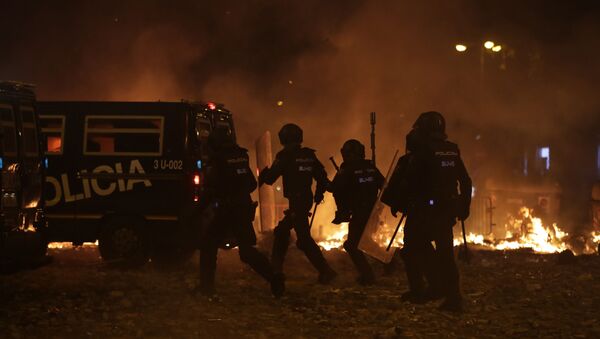 BARCELONA (Sputnik) - Riots began in one of the streets in the downtown of Barcelona near the National Police building, a Sputnik correspondent reported Friday.

The unrest was provoked by the participants of the student rallies and radicals, who started flipping trash containers and setting them on fire, as well as bombarding the police with various objects. Officers are trying to stop the radicals.

At least 25 people were injured during violent protests as night fell on Friday, with five more hurt in two other cities in the region.

Do you really think this will reduce street violence or actually boost it? #StandUpForCatalonia #Barcelona pic.twitter.com/Ru5e9AyX92

#Barcelona mayhem: Clashes with police as ‘half a million’ pro-independence supporters rally amid general strike

At the moment, the downtown is entirely blocked by the protesters. Roads are jammed, some metro stations are closed, public transportation is halted and it is impossible to get a cab to the city centre, the correspondent said.

The strike was launched as part of continued efforts by Catalan pro-independence activists to protest the Spanish Supreme Court's Monday ruling to sentence nine Catalan leaders to lengthy prison terms for their involvement in the region's unsanctioned 2017 independence referendum. The protests have drawn international attention as they have quickly turned violent. Hundreds of people, including protesters and law enforcement agents have been injured in clashes.