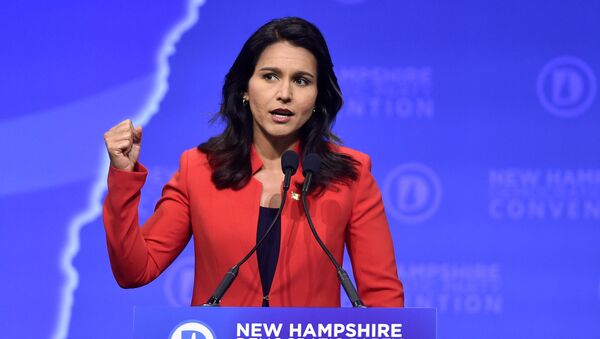 Democratic presidential candidate Tulsi Gabbard fired back at 2016 failed presidential contender Hillary Clinton on Friday, hours after news surfaced that Clinton had implied that the Hawaii representative was the "favourite" of the Russians.

Wasting no time at all, Gabbard went straight for the jugular by calling Clinton “the queen of warmongers, embodiment of corruption, and personification of the rot that has sickened the Democratic Party for so long.”

“From the day I announced my candidacy, there has been a concerted campaign to destroy my reputation. We wondered who was behind it and why,” Gabbard tweeted. “Now we know - it was always you, through your proxies and powerful allies in the corporate media and war machine, afraid of the threat I pose.”

“It’s now clear that this primary is between you and me. Don’t cowardly hide behind your proxies. Join the race directly,” she added.

Gabbard fired back at Clinton after reports surfaced that Clinton had appeared on David Plouffe’s podcast, “Campaign HQ,” earlier this week, and had taken the opportunity to offer her take on the current political climate, which included Clinton implying that Gabbard was being “groomed” by the Republicans as a third-party candidate and considered Moscow's "favourite."

“[The Republicans] also going to do third-party [candidate] again, and I'm not making any predictions, but I think they got their eye on someone who’s currently in the Democratic primary, and are grooming her to be the third-party candidate. She’s a favorite of the Russians. They have a bunch of sites and bots and other ways of supporting her so far,” Clinton said, referring to Gabbard before suddenly taking a swing at 2016 Green Party presidential candidate Jill Stein.

“And that’s assuming Jill Stein will give it up, which she might not, because she’s also a Russian asset. Yeah, she’s a Russian asset - I mean, totally. They know they can’t win without a third-party candidate. So I don’t know who it’s going to be, but I will guarantee you they will have a vigorous third-party challenge in the key states that they most needed.”

Gabbard being referred to as a Russian favorite isn’t exactly a new claim; in fact, earlier this week, the presidential contender slammed both CNN and the New York Times at the Ohio Democratic debate for making such allegations.

“Just two days ago, the New York Times put out an article saying I am a Russian asset and an Assad apologist and all these different smears,” Gabbard told viewers. “This morning a CNN commentator said on national television that I’m an asset of Russia.”

When Clinton’s camp was asked to confirm whether she was indeed referring to Gabbard in her remarks on Plouffe’s podcast, spokesperson Nick Merrill responded, “If the nesting doll fits.”

"This is not some outlandish claim. This is reality," Merrill went on. "If the Russian propaganda machine, both their state media and their bot and troll operations, is backing a candidate aligned with their interests, that is just a reality, it is not speculation."

It should be noted that Gabbard has previously ruled out running as a third-party candidate.

With the tea being spilt on the internet, netizens were very much present for the tit-for-tat.

​However, not to be out done, Merrill later reacted to Gabbard’s response with a simple, “Assad day for your candidacy.”

*CORRECTION: The headline and text of this article has been amended slightly to reflect the fact that Mrs. Clinton was apparently referring to the Republican Party, not “the Russians,” when she mentioned that someone was “grooming” a third-party candidate for the 2020 race.