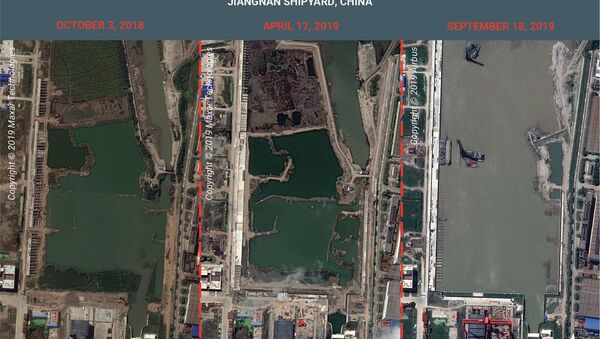 New satellite photos show the shipyard where China’s new Type 002 aircraft carrier is being built is just part of a massive, kilometer-long naval dock where even more large vessels might be constructed.

Commercial satellite imagery taken last month shows that not only is progress continuing on the Chinese People’s Liberation Army Navy’s (PLAN) third aircraft carrier, but a much larger docking area around the shipyard is being built as well, according to a new report by the Washington-based think tank Center for Strategic and International Studies (CSIS).

Taken on September 18, the satellite photos show a progression of excavation of land, an additional crane and extensive stockpiling of prefabricated ship parts, such as bulkheads, on the southern coast of Shanghai’s Changxing Island, which sits in the Yangtze estuary, when compared with older photos. 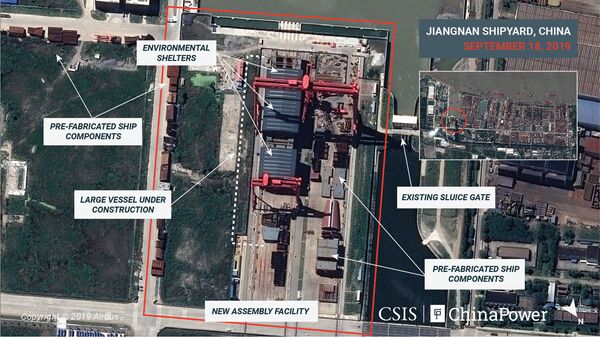 According to CSIS’ China Power publication, the photos provide the first chance to make strong estimates of the upcoming ship’s dimensions. While most of the hull remains obscured from aerial visibility by environmental shelters, the exposed bow of the ship tapers from a width of 38 to 34 meters; analysts report the water-level beam of the hull will likely be roughly 40 meters.

The ship is being built by Jiangnan Shipbuilding, a subsidiary of the state-owned China State Shipbuilding Corporation (CSSC). Another Shanghai-based CSSC subsidiary, Hudong Zhonghua, recently completed the PLAN’s first Type 075 amphibious assault ship, a 40,000-ton helicopter carrier capable of dispatching thousands of marines and their equipment. 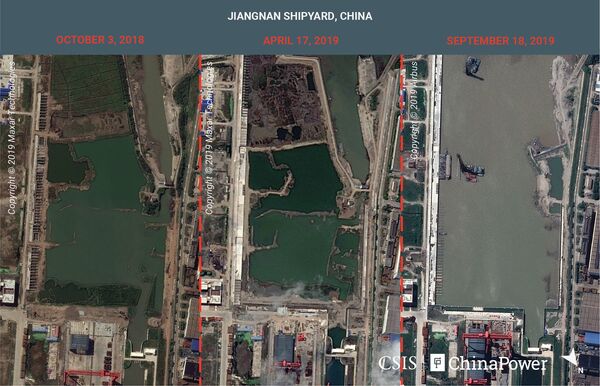 CSIS estimates the assembly of the Type 002’s hull will take at least another 12 months.

“We can see slow but steady progress on the hull, but I think the really surprising thing these images show is the extensive infrastructure buildup that has gone on simultaneously,” CSIS analyst Matthew Funaiole told Reuters for a Thursday story.

Some of the most dramatic contrast between the photos from September and previous images taken in May can be seen in the vast area south of the shipyard (at the top of the images), where excavators have slowly chipped away at a kilometer-long wharf that’s been finally opened to the sea.

“It is hard to imagine all this is being done for just one ship,” Funaiole added. “This looks more like a specialized space for carriers and or other larger vessels.” 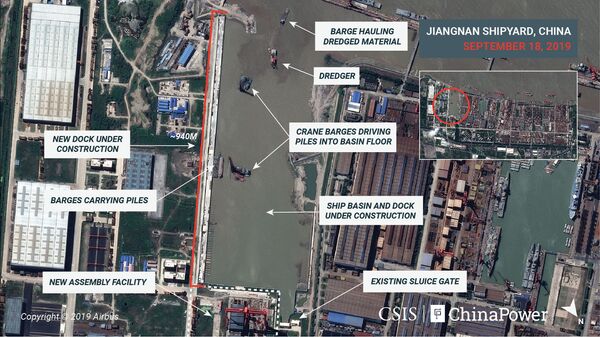 “That they’ve expanded the harbor is no surprise, given that future aircraft carriers will be larger and more complicated – such as being nuclear-powered,” naval expert Li Jie told the South China Morning Post. Li said the PLAN likely requires five or six aircraft carriers to meets its needs in the future.

China’s navy has expanded dramatically in the 21st century, increasing from a fleet of 216 ships in 2005 to 335 in 2019, outpacing even the US Navy by 49 vessels, according to a US Congressional Research Service report published earlier this week. That buildup has included not just new carriers, but also advanced missile cruisers like the new Type 055, Type 079 landing platform docks and attack submarines.

Funaiole told Reuters the Type 002, the existence of which has been confirmed by Beijing but not by the PLAN, will likely be somewhat smaller than the US Navy’s 100,000-ton supercarriers, but definitely larger than their closest challenger, France’s 42,500-ton Charles de Gaulle. Like both the De Gaulle and Washington’s Nimitz-class and Ford-class carriers, the Type 002 is expected to have a fully flat deck and launch aircraft using catapults.

The PLAN’s two present carriers, Liaoning and Type 001a, use a bow ramp to lift planes into the sky. The practice is safer and less sophisticated than catapult launching, but it limits the amount of fuel and munitions the planes can take on missions.

The Type 001a, once expected in time for the People’s Republic of China’s 50th anniversary on October 1, began its eighth sea trial earlier this week, which could lead to its commissioning. It is China’s first indigenously designed and built carrier, and when the Type 002 is completed, it will be the second. The PLAN’s two carriers are based in the Yellow Sea port of Dalian.

The Pentagon’s annual China Military Power Report to Congress this past May noted that China’s navy “continues to develop into a global force, gradually extending its operational reach beyond East Asia into a sustained ability to operate at increasingly longer ranges.”

“China continues to learn lessons from operating its first aircraft carrier, Liaoning,” the Office of the Secretary of Defense told lawmakers in the report. “Its first domestically built aircraft carrier was launched in 2017 and will likely be commissioned in 2019 – the beginning of what the PLA states will be a multi-carrier force. China’s next generation of carriers, including one that began construction in 2018, will have greater endurance and a catapult launch system capable of launching various types of fixed-wing aircraft, including early warning and anti-submarine warfare (ASW) aircraft.”

“These improvements would increase the striking power of a potential carrier battle group when deployed to areas beyond China’s immediate periphery,” according to the report, which notes the PLAN’s current “modest but growing” ability to project power beyond the “First Island Chain,” Beijing’s name for the Pacific archipelagoes closest to the East Asian coast, including the Kuril Islands, Japanese archipelago, Ryukyu Islands, the Philippines and the South China Sea.