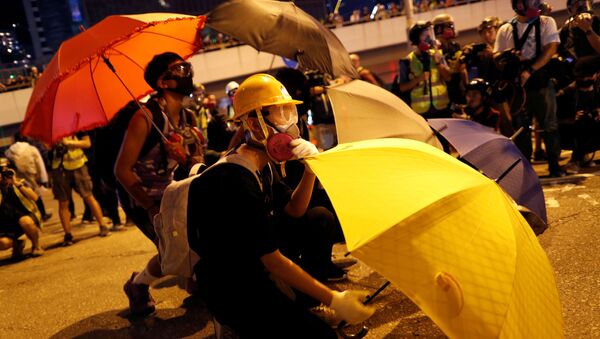 The nomination comes after weeks of protests against the now-withdrawn extradition bill, which have since evolved into violent anti-China and anti-police riots that Beijing views as being fuelled by foreign forces. According to a Norwegian pundit, violence and vandalism associated with the protests can make a peace award more problematic.

China has called for foreign governments not to interfere in its affairs after a Norwegian politician nominated “the people of Hong Kong” for the 2020 Nobel Peace Prize.

“I have nominated the people of Hong Kong, who risk their lives and security every day to stand up for freedom of speech and basic democracy, for the 2020 Nobel Peace Prize,” Guri Melby, a Nowegian MP and a member of the Liberal party tweeted.

​By Melby's own admission, she recently visited Hong Kong and claimed to be “appalled by the stories of police brutality” and “impressed by the courage of the protesters”.

I recently visited Hong Kong, where I was appalled by the stories of police brutality and impressed by the courage of the protesters: pic.twitter.com/vlUjTgOXuO

​Melby is hopeful that the nomination will “encourage the people of Hong Kong's fight for freedom and democracy”. She also suggested that what the protesters do “has an impact far beyond Hong Kong, both in the region and in the rest of the world”.

In response, China's Foreign Ministry Spokesman Geng Shuang urged the “relevant people” to be “objective and just”, as well as “cautious”.

“Hong Kong affairs are purely China's internal affairs and no foreign government or individuals have the right to interfere,” Geng said.

Meanwhile, Norwegian pundits have warned that the award will be seen as a provocation. China researcher Harald Bøckman at the University of Oslo suggested that the protests are “not yet in the Nobel class”.

“Such an award will be perceived very similar to that of 2010 and at least as provocative,” China expert Henning Kristoffersen told the news outlet ABC Nyheter. “The prize to Hong Kong activists will be perceived by Chinese authorities as interference with China's internal affairs. It is a red line for China and something the authorities do not accept,” Kristoffersen suggested. Kristoffersen also pointed out that violence and vandalism associated with the Hong Kong protests can make a peace award more problematic.

In recent months protests that originally sparked by a later-dropped bid to allow extraditions to mainland China, spiralled into broad anti-China and anti-police riots, which resulted in the worst political crisis since 1997 when Hong Kong was formally transferred to China after 157 years of British rule.

In recent decades, Beijing has had a rather strained relationship with the Nobel Committee.

Following the the 2010 award that was handed to Chinese dissident and Tiananmen protests veteran Liu Xiaobo, who later died of cancer in 2017, Beijing froze its relations with the Scandinavian country, suspended negotiations for a free trade agreement and blocked imports of Norwegian salmon, prompting Norwegian politicians to react. In 2016 Oslo pledged not to support actions that “undermine Chinese interests”, angering local peace activists and promoters of democracy.

Earlier, in 1989, the Dalai Lama, Tibet's exiled spiritual leader whom Beijing accuses of trying to split China, was awarded the peace prize.