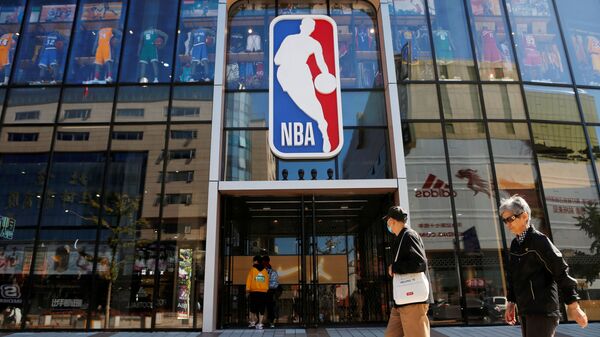 Ilya Tsukanov
All materialsWrite to the author
Earlier this month, Houston Rockets General Manager Daryl Morey tweeted, and then deleted, a message of support for anti-Beijing protesters in Hong Kong, triggering a firestorm of criticism from NBA fans in China.

“The Chinese government has never raised these kinds of demands,” ministry spokesperson Gen Shuang told reporters in Beijing on Friday.

The foreign ministry’s statement follows NBA Commissioner Adam Silver’s claim Thursday night that the league was “being asked to fire [Morey] by the Chinese government, by the parties we dealt with, government and business.”

Morey sparked criticism from Chinese NBA fans in early October after tweeting, and then deleting, an image captioned “Fight for Freedom. Stand with Hong Kong.” Chinese authorities, companies and fans saw the tweet as a case of interference in the country’s internal affairs, with the Rockets and the NBA subsequently losing local sponsors, and Chinese broadcasters deciding not to air a two-game exhibition tour by a pair of NBA teams.

In his comments Thursday, Silver said he wasn’t quite certain where the league will “go from here,” adding that “the financial consequences have been and may continue to be fairly dramatic.” Silver expressed regret for “upsetting” its “hundreds of millions” of fans in China, but argued that Morey’s tweet was an expression of free speech, which he said was one of the NBA’s “American values.”

The NBA’s growing popularity in China is said to net the franchise as much as $4 billion in annual revenues, comprising up to half of its total revenues of $8 billion in 2018.

Hong Kong has faced mass anti-government protests since early June, when the local government announced plans to adopt a bill allowing criminal suspects to be extradited to the mainland. The bill was eventually squashed, but protests have continued, with protesters now demanding amnesty for their actions during the protests, and protesting the introduction of another law which bans wearing face masks during protests and other public gatherings, which was partly prompted by China's decision to roll out AI facial recognition surveillance.

Western media coverage has presented the protests as a case of ‘pro-democracy protesters fighting China’s authoritarian government’. China has accused the West of ignoring the protesters’ anti-Chinese mainlander and anti-police violence, general vandalism and rioting, and has called for an end to interference in its internal affairs.

Hong Kong was formally transferred back to China in 1997 after 157 years of British rule, but is governed under the ‘One country, two systems’ constitutional principle formulated by Chinese leader Deng Xiaoping in the early 1980s. Under this system, Hong Kong has been allowed to retain its distinct economic, legal and administrative system.