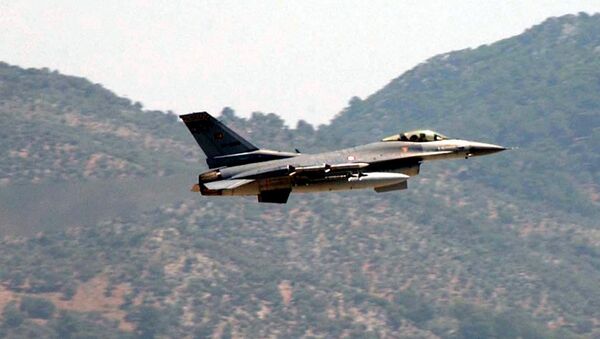 A bipartisan group of senators including Republican Lindsey Graham and Democrat Chris Van Hollen has put together legislation known as the 'Turkey Sanctions Bill', with the bill proposing 'wide-ranging mandatory sanctions' against Turkey.

"We believe that [Turkish President Recep Tayyip] Erdogan's decision to go into Syria puts our allies at risk. We believe that the rise of ISIS* is imminent if this continues. We appreciate what the president did with sanctions against Turkey. We're here to add to it, to supplement what the president did...Congress is going to speak with a very firm, singular voice that we will impose sanctions in the strongest measure possible against this Turkish outrage," Graham said, speaking to reporters in Washington on Thursday.

According to Graham, the new sanctions would affect "top Turkish officials" beyond those already targeted by the White House, including restricting visa access to the US, as well as "asking [for] a deep dive into Erdogan's personal finances," and sanctions targeting the Turkish armed forces, and Turkey's state-owned Halk Bank.

"We're considering the purchase of the S-400, the Russian missile system, to be a significant event mandating CAATSA sanctions to be imposed within 30 days, prohibit US military assistance, prohibit any US person from purchase sovereign debt from the government of Turkey," Graham added.

Chris Van Hollen called on the Senate to "move immediately to take up" the bill in response to this "Turkish aggression." "We have to send a message that America will stand with our allies in the fight against terrorism, and that we will fight to make sure that ISIS does not get more oxygen and come back," he said.

"We're doing the one thing in our power here in the United States Congress to stop the slaughter of Syrian Kurds. And by the way this is ethnic cleansing going on. The Turkish proxies that are engaged in this fight include a lot of al-Nusra elements; they've got al-Qaeda DNA. They are intent on wiping out the Syrian Kurds," Van Hollen added.

The Democratic senator emphasized that it's still "in Turkey's power to avoid these sanctions" if Ankara "stops killing our Syrian Kurdish allies, if Turkey stops enabling the rise of ISIS, and if Turkey moves itself and its proxy forces back to where they were before this invasion."

Ankara launched a military campaign in Syria last Wednesday, citing the need to set up a security zone on the Syrian-Turkish border and to clear it of Daesh and Syrian Kurdish YPG elements, which Ankara also classifies as a terrorist group. Ankara believes the YPG is coordinating its operations with the PKK, a Turkish-Kurdish political and militia movement which has waged a low intensity guerilla war against the Turkish state for several decades.

Turkey's NATO allies have decried the Syrian operation, weighing sanctions and the halt in arms deliveries. Damascus has accused Ankara of "aggressive intentions" and called on its neighbour to stop violating its territorial integrity.

On Thursday, Vice President Mike Pence and Secretary of State Mike Pompeo met with Erdogan in Ankara, with President Trump announcing via Twitter that the two countries had agreed to a 120 hour ceasefire in Syria.

* Aka Daesh, a terrorist group outlawed in Russia and many other countries.