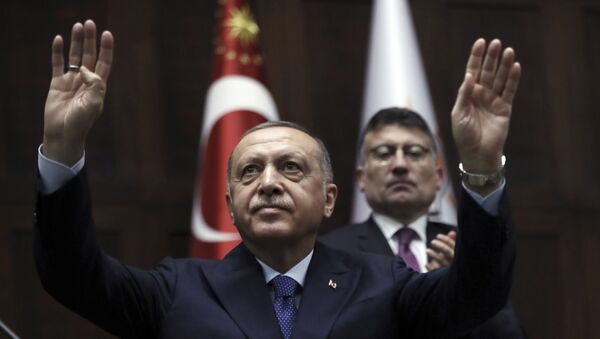 © AP Photo / Burhan Ozbilici
Subscribe
Egor Efimchik
All materials
Donald Trump has been sending mixed signals about the Turkish operation in Syria, now in its second week: he first appeared to endorse it by withdrawing the 1,000 troops from the path of Turkish forces but a week later imposed economic sanctions on Turkey.

“President Erdogan received the letter, thoroughly rejected it and put it in the bin,” the sources were quoted as saying.

The letter was first obtained by Fox Business on Wednesday, after Trump referred to it during a press conference, and has been widely circulated online due to its unusual language: it is devoid of diplomatic niceties.

EXCLUSIVE: I have obtained a copy of ⁦@realDonaldTrump⁩’s letter to #Erdogan. ⁦@POTUS⁩ warns him to not “be a tough guy! Don’t be a fool!” Says he could destroy Turkey’s economy if #Syria is not resolved in a humane way. Details tonight at 8pm #TrishRegan #FoxBusiness pic.twitter.com/9BoSGlbRyt

The letter is dated Wednesday, 9 October, the day Turkey launched its cross-border military operation in northeast Syria. Just days prior to that, Trump and Erdogan had a phone call, after which the White House announced the pullback of US troops from positions in northeast Syria, effectively clearing the way for Turkish troops.

Writing in the Washington Post before the launch of the offensive, Erdogan’s communications director Fahrettin Altun said that Trump had “agreed to transfer the leadership of the counter-Islamic State campaign to Turkey”.

The offensive, which aims to eliminate what Turkey considers to be a threat to its security, has been condemned by the Syrian government and a number of Western countries. Despite withdrawing the US troops – the only factor that had been stemming the Turkish army – Trump insisted that he did not endorse the operation, and imposed economic sanctions on Turkey this week.

President Erdogan said on Wednesday that he could “no longer” follow Trump’s shifting narrative on the operation.

Turkey’s president is meeting with US Vice President Mike Pence on Thursday for talks, which are expected to focus largely on the offensive.

000000
Popular comments
The right thing to do. You can't take Dump seriously unless you sit face to face with the arrogant Bstard and even then....