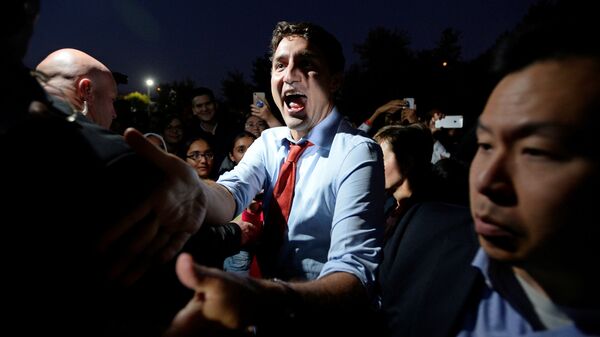 Ilya Tsukanov
All materialsWrite to the author
Canadians are set to head to the polls on Monday to elect a new parliament, with CBC News’ poll tracker showing the Conservatives running neck and neck with Prime Minister Justin Trudeau’s ruling Liberals.

Justin Trudeau’s confidence in his reelection prospects appeared to have taken a blow on Wednesday as the prime minister and Liberal Party leader appeared at a campaign stop in the east Montreal riding of Hochelaga.

“We know that the Conservative Party is running one of the dirtiest, nastiest campaigns based on disinformation that we’ve seen in this country,” Trudeau said, commenting on a conservative think tank’s spending hundreds of thousands of dollars on anti-Liberal ads.

Calling on Quebecers to reelect the Liberals, Trudeau said he wasn’t “taking any Canadians’ votes for granted.” In a possible dig at the opposition New Democrats, the prime minister said voters should elect “a progressive government, not a progressive opposition.” Trudeau added that he had a hard time believing that Quebecers would elect a party which “refuses to do anything about climate change,” in reference to the Conservatives.

Ahead of the October 21 vote, the Liberals and Conservatives have smeared one another with over-the-top campaign ads, with one Facebook ad aimed at Chinese Canadians appearing to suggest that the Liberals planned to legalise hard drugs, while another seemed to claim that voting Conservative would mean semi-automatic assault rifles in Canada’s streets.

Based on an average of polls, CBC News’ Canada Votes 2019 has Conservatives running ahead of the Liberals at the national level, with 32.2 percent support for the opposition party compared to 30.9 percent for the ruling Liberals, while the New Democrats, Greens, and Bloc Quebecois and the People’s Party are polling at 18.2 percent, 8.3 percent, 6.9 percent and 2.6 percent, respectively.

According to the broadcaster, the Liberals’ chance of retaining their majority is currently estimated at only 8 percent, while the chance of either the Liberals or the Conservatives winning a plurality is 44 percent .

Justin Trudeau’s Liberals won an outright majority in the 2015 elections, trouncing Stephen Harper’s Conservatives and promising “real change” for Canadians. However, the party and Prime Minister Trudeau have since been embroiled in a number of controversies. Last month, old photos surfaced showing Trudeau in brownface makeup, leading to accusations of racism and prompting an official apology.

The Liberals also continue to be haunted by Trudeau’s involvement in the SNC-Lavalin affair, focused around an unscrupulous Quebec-based construction company accused of paying millions in bribes to secure contracts in Libya. This summer, Canada’s parliamentary ethics commissioner concluded the prime minister had broken ethics rules by pressuring Canada’s former attorney general to settle the case against SNC-Lavalin. Trudeau rejected calls to quit after being implicated in the scandal.

Andrew Scheer, leader of the Conservatives, was embroiled in a political scandal of his own earlier this month after it was revealed that he was a dual citizen of both Canada and the United States. The revelation served to undermine the Conservatives’ previous attacks on other politicians with dual citizenship.

Justin Trudeau's father, Pierre Elliott Trudeau, served as prime minister between 1968 and 1979, and then again from 1980 to 1984, and is one of the longest serving prime ministers in Canada's history. In a 2016 Maclean's ranking, he was picked the fourth best Canadian prime minister of all time.