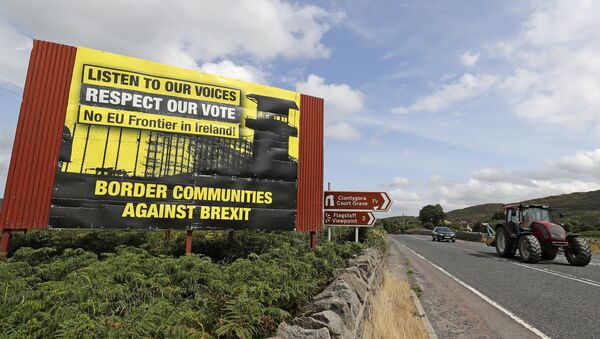 Earlier, the Democratic Unionist Party (DUP) has pledged to stop any Brexit deal that keeps Northern Ireland in the EU Customs Union.

Northern Ireland's Democratic Unionist Party said that, as things stand, it cannot support what is being suggested regarding the customs and consent issue.

DUP leader Arlene Foster said that will continue to work with the government to try to get a sensible deal.

"We will continue to work with the Government to try and get a sensible deal that works for Northern Ireland and protects the economic and constitutional integrity of the United Kingdom," DUP leader Arlene Foster added.

German Chancellor Angela Merkel said that the EU won't allow a hard border between the Republic of Ireland and Northern Ireland.

​The British pound skidded after DUP said it could not support the Brexit deal as it currently stands.

UK Prime Minister Boris Johnson has been seeking to withdraw the United Kingdom from the European Union either with a deal or without on 31 October.

Earlier, Johnson unveiled his new Brexit blueprint which revolves around an all-Ireland regulatory framework on cross-border trade. Under his plan, Northern Ireland would exit the EU customs union with the rest of the UK after the end of the transition period, albeit with some form of regulatory checks in place for goods crossing the Irish Sea from the British mainland to the six counties.

At the moment, the UK should exit from the EU on 31 October. Fearing that UK Prime Minister Boris Johnson might withdraw the country without an agreement, parliamentarians passed a law requiring the prime minister to ask for a three-month delay in the absence of an agreement with the EU as of 19 October.