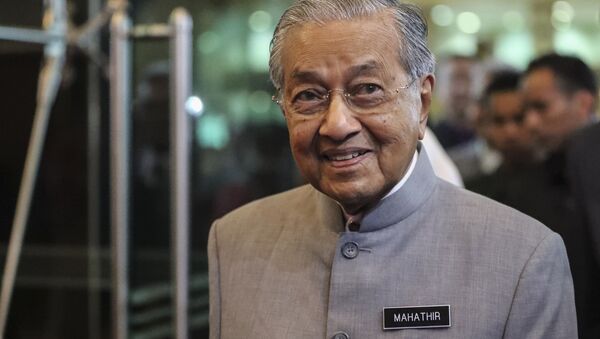 Sputnik (New Delhi): Prime Minister Mahathir Mohammad has turned to diplomacy to placate New Delhi after India threatened to restrict palm oil imports from Malaysia after he described Jammu and Kashmir as an “invaded and occupied” region in the recent United Nations General Assembly.

Mahathir said he would “turn to diplomacy” to mitigate the impact of India's decision to reduce palm oil imports from the Southeast Asian nation – a decision reportedly taken by New Delhi over recent remarks on Kashmir made by Mahathir at the United Nations.

Malaysian state news agency Bernama said that Mahathir revealed his plans at an event in Kuala Lumpur on 16 October.

“If the [Indian] government launched a boycott or something like that, then we will have to work diplomatically or reduce the kind of action that they have taken,” media reports quoting Mahathir said.

To placate an annoyed New Delhi, the Malaysia Prime Minister had, on Wednesday, offered the increase the intake of buffalo meat and sugar from India.

Media reports quoted Bipul Chatterjee, who heads the Centre for International Trade, Economics and Environment in Jaipur, as saying that “the country will buy more from Indonesia and increase edible oil supplies from Ukraine to replace the import of Malaysian palm oil”.

Reports suggest that traders in the country have stopped buying palm oil from Malaysia, fearing the imposition of import taxes. India is the third-largest buyer of Malaysian palm oil.

Tensions sparked between the two nations on September 30 at the UN after Mahathir accused India of “occupying Kashmir,” saying that country may have its reasons to do so, but the move was still wrong.