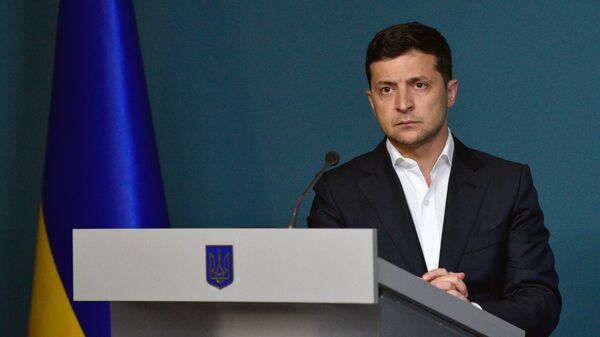 MOSCOW (Sputnik) - Kiev's idea about the dissolution of the self-proclaimed Donetsk and Lugansk people's republics (DPR and LPR) is unexpected for other participants of the Normandy format, so it is yet difficult to comment on it, Kremlin spokesman Dmitry Peskov said Wednesday.

“These are again new conditions... from the Ukrainian side. Such new conditions are very unexpected for Moscow, Berlin and Paris. Therefore, here so far it’s hard to comment on whether this means a departure from the Minsk agreements, from the Minsk plan of action, whether it means abandoning earlier commitments, previously put signatures - it is not yet clear," Peskov told reporters.

A regular meeting of the Contact Group on Donbas in Minsk was held on Tuesday. Kiev said it was ready to implement the political part of the Minsk agreements only after the dissolution of the DPR and LPR and the withdrawal of forces along the entire contact line.

In turn, Ukrainian President Volodymyr Zelensky said Wednesday that Kiev was waiting for seven days without shelling in Donbas to pull out troops, and the ceasefire must be confirmed by the OSCE Mission.

“We will be waiting for seven days of silence. For us, the indicator is the OSCE, which should say 'yes, there has been no shooting for seven days'. As of today I know that there has been silence for two days. We will believe, we will wait for seven days of silence, and we will talk about the withdrawal [of forces in Donbas]," Zelenskyy said at a joint briefing with his Latvian counterpart Egils Levits in Latvia as broadcast by the Ukrainian presidential office on Facebook.

Earlier, spokeswoman for Kiev's representative at the talks, former president Leonid Kuchma, said that Ukraine was ready to fulfill the political part of the Minsk agreements only after the dissolution of the self-proclaimed Donetsk and Lugansk people's republics (DPR and LPR) and the pullout of troops along the entire contact line.