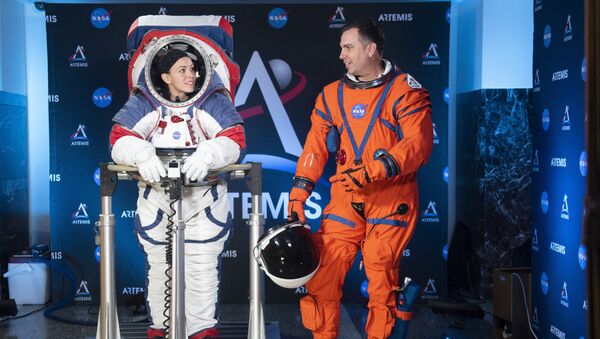 NASA has been directed by the Trump administration to relaunch programs to send humans to the Moon by 2024, some fifty-five years after the first human-crewed mission Apollo-11, set foot on our natural satellite.

US space agency NASA has presented the prototypes of spacesuits to be used for moonwalking in its ambitious Artemis moon programme that seeks to return humans to the Moon by 2024.

The agency's engineers Dustin Gohmert and Kristine Dans showed off the new suits at NASA headquarters on Wednesday, performing crunches and squats in front of the audience.

One of the suits is designed for launch and re-entry, while the other for exploring the lunar South Pole. Both spacewear items have been tailored to allow for greater mobility than suits used in previous missions. The spacesuits are also made to fit any woman or man.

Today, we previewed the next-generation #Artemis spacesuits that our astronauts will wear – 1 for launch and re-entry, and 1 for exploring the lunar South Pole. Watch a recap: https://t.co/e4cxB3rK6e pic.twitter.com/PtYSLqHq62

The suits are slated to be the first-ever items of spacewear to have zero-gravity properties.

The presentation of the new spacesuits comes as the first all-female spacewalk is scheduled to take place this week after previous unsuccessful attempts, due to the unavailability of suitable spacewear.