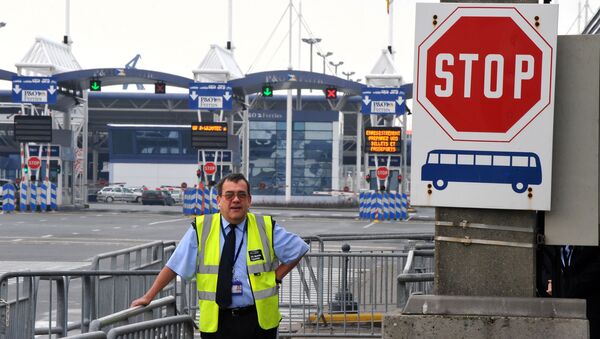 © AFP 2022 / Philippe Huguen
Subscribe
MOSCOW (Sputnik) - With the new Brexit deadline approaching in just two weeks, the UK still largely relies on the model of border regulations with the EU intended for the previous deadline, and is facing significant risks in terms of making all new arrangements actually function in practice, the parliamentary National Audit Office (NAO) said.

"The government has made progress with putting in place the systems, infrastructure and resources required to manage the border if the UK leaves the EU without a deal on 31 October 2019," the watchdog said in the report, albeit stressing that "there is still some work to do," especially when it comes to "bringing all these elements together for the first time in a live environment," which is an "inherent risk."

With more than 270 recognised crossing points between the United Kingdom and European Union, the most significant risks for the operation of the UK border in the event of a no-deal Brexit, according to the NAO, are the preparedness of businesses, arrangements for the Irish land border, and the potential customs controls that can be imposed by EU member states.

"In the event of the UK exiting the EU with no deal on 31 October 2019, the government plans to implement broadly the same model that is intended for 12 April 2019. Departments have not made wholesale changes to their plans and have largely not developed their systems and processes beyond the minimum operating capability that they intended to achieve for 12 April 2019," the NAO said.

According to the report, a large proportion of businesses will not be ready for new customs and regulations if the UK exits the bloc without a deal, chiefly because of not being adequately informed about their new rights and responsibilities, which, in turn, is likely to trigger severe disruptions to freight flow across the UK border.

"It is impossible to know exactly what would happen at the border in the event of no-deal on 31 October 2019," the NAO continued, adding that many of the government's new arrangements would anyways be temporary and "take some time for a fully functioning border to be put in place."

After the United Kingdom voted to leave the European Union in a referendum in 2016, the country triggered Article 50 of the Treaty on European Union and began the two-year formal withdrawal procedure. The initial Brexit date was scheduled for 29 March, but the deadline was delayed twice amid London's failure to negotiate the divorce terms, both internally and vis-a-vis Brussels.

UK Prime Minister Boris Johnson is determined to take the country out of the bloc even if no deal is agreed upon, which would mean, among other things, an immediate termination of the UK-EU border regulations with subsequent impact on the cross-border movement of people, funds, goods and services, which currently are in a free flow.