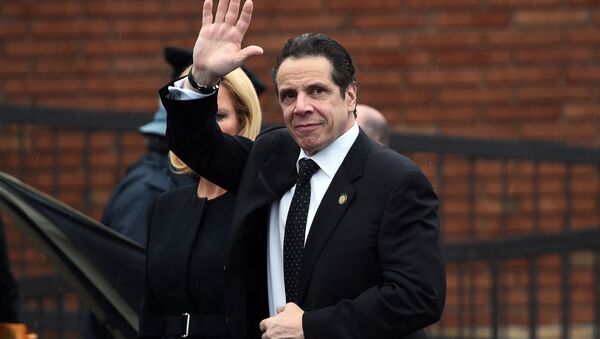 Andrew Cuomo, who has served as the Democratic Governor of New York since 2011, has recently been working to honour Mother Cabrini for her work in helping the Italian immigrant community.

Governor Andrew Cuomo of New York used the N-word during a radio interview on Tuesday while quoting a New York Times op-ed about discrimination against Italian-Americans.

Cuomo called into WAMC radio and was subsequently asked a question regarding Indigenous Peoples' Day, which was celebrated concurrently with Columbus Day on Monday. He quickly turned to the topic of the treatment of Italian Americans and while referring to a New York Times article, said: “Going back to the Italian Americans because now you have me. They used an expression that southern Italians were called quote-unquote, and pardon my language, but I’m just quoting The Times, n**ger wops. N-word wops as a derogatory comment.”

​Some Twitter users said the governor sucks in response to the use of the derogatory word.

Obviously it goes without saying that Andrew Cuomo sucks.

Others questioned the potential double standard if President Trump had said something similar.

@NYGovCuomo I didnt see anything on Twitter about New York State Governor Andrew Cuomo dropping the N word on a live broadcast. HE IS A RACIST RACIST RACIST! I WONDER WHAT WOULD HAPPEN IF OUR GREAT PRESIDENT DID THIS ....LIBTARDS WOULD BE ALL OVER IT. WHERE ARE YOU NOW LIBTARDS?

​While some referred to the backlash as "language policing."

so Andrew Cuomo (who is indeed a racist, obviously) is being criticized because he "used the n-word", that is, he quoted a derogatory comment "nigger wops" used by The Times against Southern Italians. The extent to which policing of language has got in the USA...

This comes the same day that Jane the Virgin actress Gina Rodriguez used the N-word on Instagram, resulting in serious backlash. In response to which she apologised and deleted the story.

​On Monday, Cuomo gave his “full support” for a statue of Saint Frances Cabrini, the founder of the Missionary Sisters of the Sacred Heart of Jesus in 1880, an organisation which supported Italian immigrants travelling to the US.

“As Italian Americans, we must also remember that we ourselves are not immune from attack. The ugliness of Italian American stereotyping is still alive and well. Our battle is not over,” Cuomo said Saturday at the Columbus Citizens Foundation Gala.

Mother Cabrini was a great New Yorker, literally a saint, who did tremendous work for the immigrant community.

We will work with the Diocese of Brooklyn, with the Columbus Citizens Foundation, and other groups, and we will build the statue to Mother Cabrini. She deserves it. pic.twitter.com/TAcr4IN8Kc

​He also supported the Brooklyn Diocese’s plans to build a memorial for Cabrini.

“They are right. We should applaud their courage and their activism,” he stated.