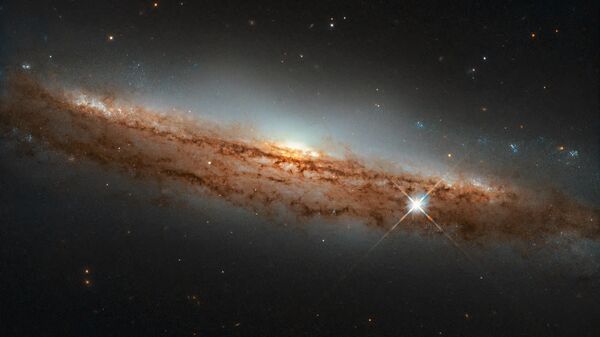 The NASA/ESA Hubble Space Telescope, which orbits the Earth, captures images of distant galaxies of all shapes and sizes in the universe.

A spiral galaxy located about 60 million light-years away, in the constellation of Hydra (the Sea Serpent), has been captured in a photo by the Hubble Telescope.

The so-called NGC 3717 is seen sideways in the image and looks like a thin pancake or a Frisbee. Despite its appearance, there are bright spherical bulges filled with stars inside such spiral galaxies. According to NASA, the closer part of the galaxy is "tilted ever so slightly down, and the far side tilted up", allowing for a view of the central bulge and across the disk.

The image has been published on NASA Hubble's official webpage.

#HubbleFriday Seeing the profile of galaxy NGC 3717 can provide a vivid sense of its three-dimensional shape. Spiral galaxies are mostly thin disks, but they have bright, spherical, star-filled centers that extend above and below: https://t.co/udIHfCXo9z pic.twitter.com/4fsXRuhMm2