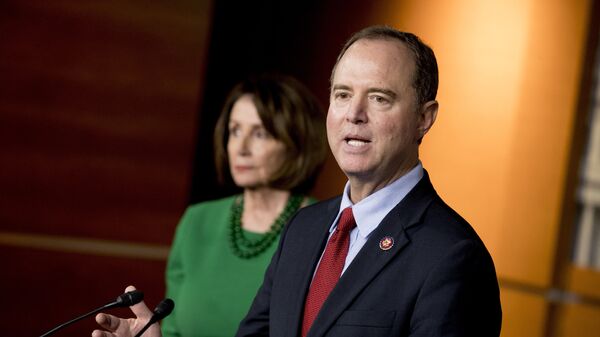 House Speaker Nancy Pelosi announced during a Tuesday evening press conference that a full vote on the House of Representatives floor concerning US President Donald Trump's impeachment inquiry has not been scheduled.

“There is no requirement that we have a vote and so at this time we will not be having a vote," Pelosi told reporters following a 6 p.m. meeting with fellow House Democrats.

House Intelligence Committee Chairman Adam Schiff, who has been criticized for partisan behavior since heading the inquiry, claimed that Ukraine had been "invaded" by Russia and asserted Trump, Vice President Mike Pence and the White House's refusal to comply with the investigation is a "complete effort by the administration to stonewall" the probe.

An aide reportedly close to the situation previously told Politico that leading Democrats are still “getting a read on where these members are following a two-week recess.”

Several Republicans have critiqued the investigation's motives and called full House vote in the name of democracy.

Trump has also been vocal about recent developments blasted the duration of the impeachment probe hearings and called for a more "transparency" in a Tuesday tweet.

Democrats are allowing no transparency at the Witch Hunt hearings. If Republicans ever did this they would be excoriated by the Fake News. Let the facts come out from the charade of people, most of whom I do not know, they are interviewing for 9 hours each, not selective leaks.

"President Trump and his administration cannot participate in your partisan and unconstitutional inquiry under these circumstances," White House counsel Pat Cipollone said in an October 8 letter to House Democrats.

However, Democrats, such as Representative and House Judiciary Committee member David Cicilline have pushed back against a vote on the House floor for an inquiry.

“It’s completely unnecessary," he told Politico. "The only time a vote is required is if and when articles of impeachment come to the floor. This is an effort by the president to distract from the shocking and serious allegations of misconduct.”