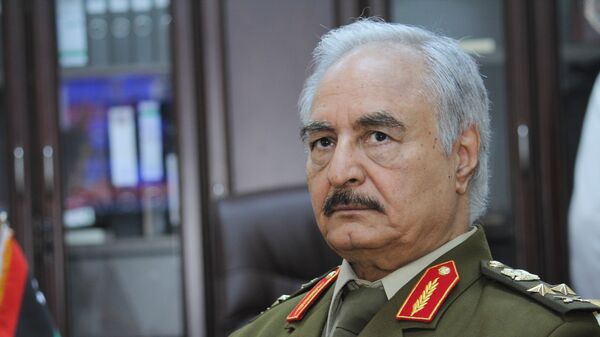 BENGHAZI (Sputnik) - Field Marshal Khalifa Haftar, the head of the Libyan National Army (LNA), has explained the situation in the war-torn country and described Libya’s potential future in an interview with Sputnik.

Khalifa Haftar stated that the country could have eliminated terrorism years ago, but the international arms embargo stopped the military from obtaining weapons, while the terror groups managed to smuggle arms without difficulty.

"The continuation of the international embargo means a boost for terrorism and war, the aggravation of its consequences. If not for the embargo, then we would have eliminated terrorism years ago and should have not paid such a high price for it. It should be noted that, despite the embargo, a vast amount of weapons is openly delivered to terrorist and armed groups in Libya by air and sea. We wonder how the world allows this on the one hand, and on the other, calls to fight against terrorism", he said.

He noted that at the moment there is no contact between the LNA and their opponents from the Government of National Accord (GNA).

"Unfortunately, we have wasted our precious time in dialogue with him [the Council's president Fayez Sarraj] in response to regional and international endeavors, but now there is no mediation, neither international nor local, and also between us and the council, including its head", Haftar said. 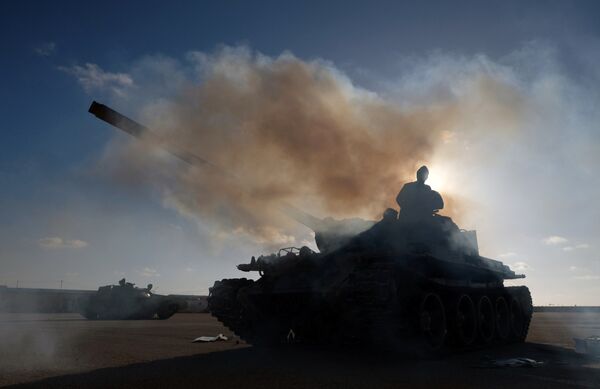 Members of Libyan National Army (LNA) commanded by Khalifa Haftar, get ready before heading out of Benghazi to reinforce the troops advancing to Tripoli, in Benghazi, Libya April 13, 2019
© AP Photo / Esam Omran Al-Fetori

The LNA chief remarked that there was a "misconception that the so-called Presidential Council [of the GNA] can instruct terrorist and militia forces, which the army is fighting, to continue fighting or, for example, set a ceasefire".

"This is a big lie which now has been discovered at the local and international levels. The truth is that the Council receives instructions from these groups and not vice versa, and its role is limited to providing money, weapons, and mercenaries based on the orders issued to it [the Council]. And the orders should be implemented immediately”, the field marshal said.

"None of the few remaining council members, starting with its president, dare to reject the instructions from those terrorist gangs. The Presidential Council can only execute orders. This is a fact that no longer needs to be proved. The Council itself includes more than one member belonging to terrorist organisations", he continued.

Since the overthrow and assassination of Libyan leader Muammar Gaddafi in 2011, the country has been gripped by civil war. Libya is now divided between two governments, with the eastern part controlled by the LNA and the western part governed by the Government of National Accord.

Future of the Country

The head of the LNA also explained that the country's fate depends on the liberation of Tripoli from terrorists and armed groups. He noted, however, that no specific timeline can be set for liberating the capital city.

"This is a war to release the capital with around 2 million people. It’s not a project for which we can set a specific timetable ... We can end the war in a day or two, sweeping away all on the way by heavy weapon, but it would lead to the destruction of the city and heavy civilian casualties", Haftar said. 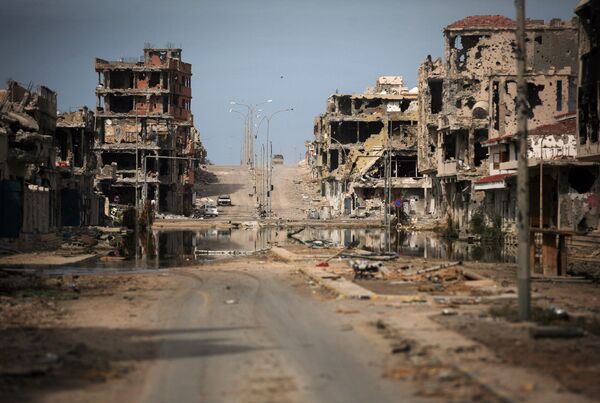 The army places citizens' safety above all else, he added, noting that the LNA aimed at defending Tripoli residents from militias' violence, but not at entering the capital "at any cost."

"We don't want to harm the citizens and facilities, that’s why we were trying to lure these groups to the outskirts of the city. [As a result,] we succeeded in this, the terrorists have suffered great losses among their ranks. We will enter Tripoli to restore its prestige, status and role as the capital for all Libyans, a capital of security and peace, and we will rid our people of the fractures of armed militias and terrorist groups", the Field Marshal pledged.

In April, Haftar's forces engaged in an offensive to capture Tripoli from the rival forces of the UN-backed GNA. According to the World Health Organisation, at least 1,000 people died during the clashes.

The Field marshal said he does not currently consider running for president, as the climate in the country is not yet ready for the election.

"The question of my candidacy for the presidency or not is not my current concern at all" Haftar said, when asked whether he would run for pthe residency after military operations were completed.

He specified that the country would first need to boost its security and socioeconomic sphere. 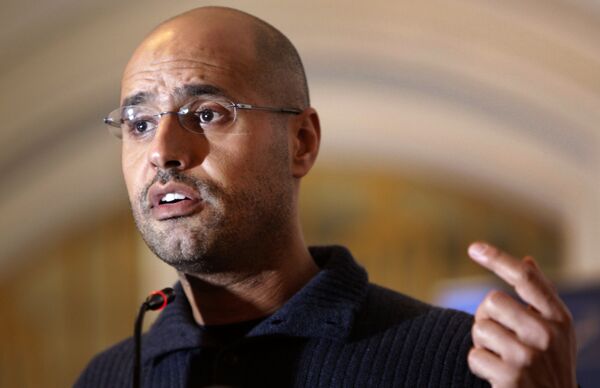 In this Feb. 25, 2011, file photo, Seif al-Islam Gadhafi, son of Libyan leader Moammar Gadhafi, speaks to the media at a press conference in a hotel in Tripoli, Libya
© AP Photo / Ben Curtis, File

Haftar also commented on the recent statement of Saif Islam Gaddafi, the son of the late Libyan leader who had expressed his readiness to participate in the vote, stressing that there was no enmity between the two.

"He is a Libyan citizen. If the legal conditions are met, it is his natural right [to participate in the elections]", Haftar said, when asked about Saif Islam Gaddafi's plans to run in the upcoming presidential election.

The field marshal added that it was not his concern "if he [Gaddafi] is in the country or abroad."

"I do not know where he is now and there is no communication between us, but this, of course, doesn’t mean any disagreement or enmity. Our enemies are the terrorists, and everyone who carries arms against the citizens, attacks the sanctity of the people, preying on their dignity, loots the wealth of Libyans and jeopardizes the safety of the country," Haftar said.